As many of you may have read, the Taylormade Japan Burner Forged and R9 Forged were supposed to be part of my forged cavity shootout however they demos never came in time from Taylormade for the initial test. Because of 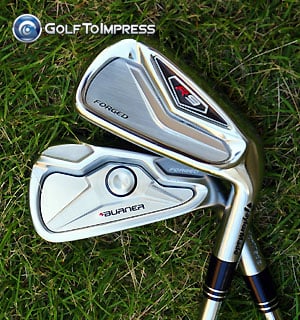 the delay I had broken the test into 2 groups, with the Burner Forged and R9 Forged being part of the 2nd group to be reviewed in September. However on Friday, a box appeared at my doorstep from TM with both demo irons ready for testing. My initial thoughts were to simply test the irons in September with the second group and report the results then but after taking a few photos of them this weekend I decided to make this post first with a basic comparison of the two irons since I have gotten so many requests and questions about how the two fit into TM’s lineup and their differences.

The Burner Forged has in fact been out for nearly a year and this is the second time I’ve had the chance to spend time with the demo iron.The soft S25C Burner Forged features USGA approved V Grooves and a very slick silver satin finish.  The new Burner Forged is a modern looking iron doesn’t have some of the flashy colors of TM Burner irons of past which is a good thing as its clean design is very eye catching. This is a solid iron with NO pocket cavity. Taylormade launched this iron late last year as an iron for the better player wanting forgiveness and something a little larger than a compact cavity as there is some offset and the top line is not thin by any means. The Burner Forged is soft and forgiving and simply looks great.

R9 Forged: For those who can’t play the R9 TP Forged

The USGA conforming R9 Forged was released in May of this year and just like the Burner Forged it is also aimed at the better player wanting forgiveness and more ease of use in a forged iron. Unlike the all S25C body and face of the Burner Forged, the R9 Forged features a 2 piece design in the 3 to 7 irons featuring a 17-4 stainless steel body and a soft S25C forged face. The 2 piece irons use a pocket cavity for added forgiveness and ease of use while the 8 to PW  and AW and SW are 1 piece S25C forged heads with no pocket cavity.  While the Burner Forged features that cool pearl silver satin finish, the R9 Forged is a combination of chrome and satin.

At initial glance, both irons look very close in physical size. They are both in between compact and mid sized irons. Face progression specs actually say that the R9 Forged has a touch less offset but the difference is small and it’s hard to see with the naked eye. The R9 Forged in fact has a slightly thicker top line but again the difference is very hard to spot. The R9 top line has two finishes actually which give the illusion of a thinner top line than it actually has. At address, the R9 Forged seems a touch more straight and boxy while the Burner Forged is a bit more rounded. 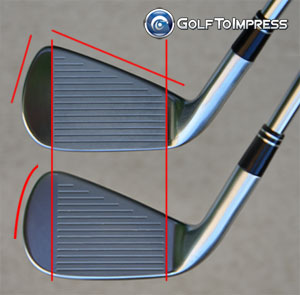 While both heads are very close in heel to toe length, the Burner forged actually has a smaller hitting area on the face and its scorelines are shorter from heel to toe. From the face profile view (R9 Forged on the top and Burner Forged on the bottom) you can also see the slightly boxier toe and straighter top line of the R9 Forged compared to the Burner Forged but again the differences in shape are very subtle. The height of the irons at the toe and heel are almost the same and both have the same number of score lines. The Burner Forged has a more rounded leading edge while the R9 Forged is straighter. Aesthetically they use the same ferrule and both 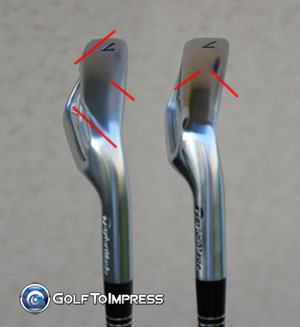 have Taylormade embossed on the hosel, in black on the R9 Forged and with no paint fill on the Burner Forged. Both irons have serial numbers laser etched on the hosels above the TM logo.

The R9 Forged and Burner Forged have rather different soles when it comes to grind and appearance. The Burner Forged has the rounder sole with leading edge relief and cut away grind on the toe and heel to prevent digging of the toe and heel which can cause slices and hooks. The R9 Forged actually appears a touch more narrow but that could be an illusion from the leading edge and trailing edge relief which you can see in the picture.  Both grinds work for each iron and contribute to each model making pure contact in various lies. 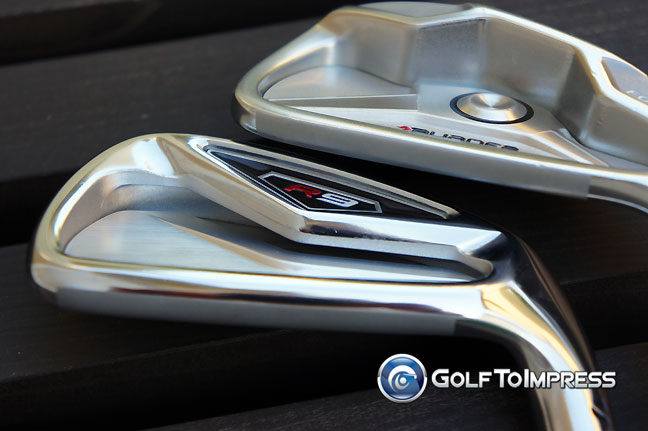 You can see in the picture above the pocket cavity of the R9 Forged and the solid and deep cavity of the Burner Forged.  Because of the cavity design, the Burner Forged may have the slightly more pure feel at least when compared up to the 7 iron in the R9 Forged set which has a subtle click due to the pocket cavity. The 8 iron and up are more solid feeling and just as pure as the Burner Forged.  I like both irons and the way they look. As a mid-capper striving to improve, both these irons suit me performance and appearance wise. They are not too small yet also not too big and set up nicely. Both are easy to hit straight and even workable for me with a slight fade or draw (both irons were shafted with 950GH Stiff). Players in the 80-90 range will appreciate these irons for their forged feel and size yet ease of use and performance.

I really like the R9 Forged but as I’ve said before, I love the Burner Forged and still think they’re the best looking TM iron out there. Maybe the best all around balanced performer as well.