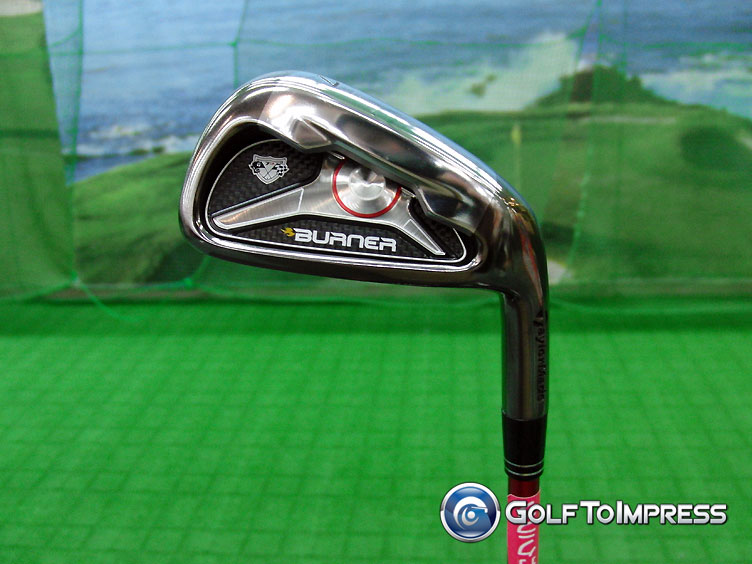 I was testing drivers on the launch monitor yesterday and had the chance to spend around fifteen minutes with the new 2010 Taylormade Burner TP irons. Unfortunately 15 minutes indoors hitting off a mat does not count for me as a review so I decided to write up this post as initial impressions. The demo I had was shafted with the very nice Shinobu Moromizato (top Taylormade Japan ladies pro) red color Graphite Design Tour AD Protoype iron shafts in stiff flex. These shafts are 78-79g especially made for Moromizato on tour. The grips are Golf Pride Taylormade New Decade Red grips, a cool combination with the shaft.

The iron is quite stunning in real life, small compact, thin top line and very little offset. It makes the R9 Japan (R9 TP in the US) look larger and rounder. The Burner TP has athletic sharper looking lines and is very pleasing to the eye at address. I actually did not expect the top line to be this thin after spending time with the R9 late last year. The smoked finish looks great with the red shaft.

Looks aside I know everyone wants to know how this iron feels. First let me say that I have NOT been a fan of TM cast irons in the past. I have preferred their forged models like the r7 Forged and the current Burner Forged, both which feel very soft. I m glad to report that pured shots with the Burner TP are indeed buttery soft for a soft cast iron. Though I do not usually play stiff flex, these shafts were a very smooth combo with the Burner TP. A easy relaxed swing produced very smooth feel and buttery pure contact and the type of soft sound on impact you typically get with a forged iron.  Though the Burner has a pocket  style cavity design, there is no click to it in my opinion.

While compact players irons like these are not usually forgiving for the average golfer, I was surprised I could hit these rather well. They are obviously not the most forgiving irons nor are they meant to be but they definitely did not feel terrible on mis hits low on the face or towards the heel or toe. I believe the shaft itself may have contributed a lot to the feel so I have to say props to TM Japan for actually offering the Burner TP with Shino-chan’s prototype shafts.

Workability is very good with these irons as even I could hit a draw and fade with these irons which made me begin to think I should have these in the bag. (a draw for me was easier than a fade once again probably thanks to the graphite).  As my fifteen minutes passed and I got back to testing the new Legacy Tour drivers, I began to understand why demand for these Burner TP’s have been so high.  Based on intial impressions they seem to be a pretty darn good iron… so who wants dibs on my set after I get it. (^_^)

Though the environment was different from the surroundings around my house that I usually use as a back drop, I did take some indoor pics because everyone loves pictures!