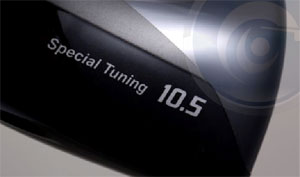 I received more detailed information today from Ryoma on their new Hi-Cor driver model as well as the much anticipated new fairway woods. Due to an NDA however I cannot post pictures of the fairway woods until October but I will provide info and feedback on the design.  First with the new Hi-Cor driver which looks just like the current D-1, V-Spec and Premia models. The new Hi-Cor Model is dubbed the Ryoma D-1 Special Tuning model and Ryoma is boasting target distance gains of up to 30 yards. While visually the heads appear the same as current models, Ryoma has fine tuned the face and body of the driver to increase COR of the Special Tuning models to over 0.88.  Their key focus with the increased COR as well as structural changes are simply as they put it “to crush the ball at impact” and create as much initial ball speed as possible.

The new D-1 Special Tuning models feature an all new premium forged TTX face material (the current D-1 and V-Spec are TDW and the Premia TDX) which utilizes variable face thickness to create a much more spring like effect. The sweet spot of the face is 2.6mm thick and the outer parts of the face a mere 1.3mm thin! I don’t think I know of any driver in golf that has a face section as thin as that. The face is laser welded to its monocoque unibody which features industry leading 0.3mm wall thiness (is there such a word as thiness?) all around.  Now here is the bad news… with an unprecedented thin walled face, Ryoma has set a swing speed limit on the Ryoma Special Tuning Hi-Cor heads. They do not suggest that players swinging over 47m/s or 108mph use this head. Due to the thinner walls, the Special Tuning models also have a extended 2 year warranty and should the face crack, Ryoma will replace the driver with an identical model. Should the driver crack a second time, Ryoma will still replace it but with the standard thicker faced conforming model. There will be two Special Tuning models. a Gold Version and  a Black Version. The Gold Version will be available in 9.5 10.5 and 11.5* lofts while the Black Version in 9.5 and 10.5* lofts.  Both models will be available shafted with Ryoma stock shafts or as heads only.

Now on to the fairway woods. I must say they look better than I expected.  They border on the larger side at 220cc for the F2 to 140cc for the F9.  All of the D-1 F heads as they are called have square face angles.  The D-1 F will be available in 13 15 18 21 and 24* lofts. The F2, F3 and F5 models all fall right below 0.83 COR and share the same all titanium construction as Ryoma’s D-1 Drivers. Yes Ryoma is able to fit a 60g Power Booster weight on the back of all the FW models.  Not only that but they also add an additional 60g weight on the front sole called the Spin Control Unit. Considering the 13* weighs 209g, and uses 120g worth of weights, it means the 0.4mm walled body is a mere 89g in weight! Ryoma then plasma welds on their premium forged TDW face for maximum ball speeds and feel.  The F7 and f9 shorter woods have a similar design except use a maraging face and stainless steel body.

Thanks to the 60g backweight, the sweet spot of the Ryoma  fairway woods is huge. So huge that Ryoma claims there is very little difference in direction and distance on off center hits vs shots off the center of the club.  In order to counter the huge weight in the back which in a smaller fairway wood head would push the CG too far back and low, Ryoma uses that Spin Control Unit I mentioned earlier, another 60g right below the leading edge of the head. Ryoma says this weight drastically reduces spin and creates a strong and powerful trajectory that will not lose out to the wind.  Yes folks, Ryoma has designed their FW to be a pure distance club that will rival the Egg Spoon.

Ryoma has designed the CG Point of their fairway woods to match the ball exactly at impact whereas on some deeper fairway woods the CG point on the face is in fact higher than the point of impact. Ryoma’s design features maximizing distance through perfect impact in turn maximizing energy transfer through its power booster. Another key point of the Ryoma FW is that its COR is right below the USGA allowed 0.83. Considering how much smaller a fairway wood face is than a driver face makes this number quite staggering as many fairway woods on the market feature COR of around 0.70 to 0.75. Ryoma believes their FW will create more ball speed than any other FW in golf. All the FW’s will be available with stock shafts from Ryoma or as heads only with the F2 F3 and F5 Ti models costing nearly twice as much as the F7 and F9 heads.

Now I have to admit this all sounds very exciting but at this point its just some specs and a product description sitting in front of me.  However, if the new Ryoma FW plays anywhere as long and as easy as the driver, it could be a huge game changer in the Japanese market where the Egg and other driving type spoons have dominated distance wise. I can’t wait to find out in mid October!