There has been a lot of hype for the new Ryoma F fairway woods. It has the reputation of its driver counterpart the Ryoma D-1 to live up  to. The D-1 Driver as everyone knows is probably one of the most forgiving drivers to ever come out of Japan. It was easily Tourspecgolf’s most popular driver of 2011. So when Ryoma announced a fairway wood that would perform like the driver, people jumped at it right away. So after more than a month of testing, does the Ryoma F deserve all the attention its been getting?

As I had noted before the fairway woods looked better than I had originally expected. I was not the biggest fan of the look of the driver though its performance far out weighs its aesthetics.  The fairway wood is on the larger side at 220cc for the F2 to 140cc for the F9.  If you want to see a physical comparison, I did one earlier with the egg Spoon here. All of the D-1 F heads are spec’ed to have square face angles. Like the driver it appears to have a slightly closed face which many have said is an illusion caused but the slight onset/face forward and the way the sole sits. Even if the face is closed, its not by much and for many average golfers who will consider the Ryoma F, a tad closed may not be a bad thing. At address, the head does make the ball look small and could pass for a 350cc compact driver. For some the head may seem to big but for others, its size may inspire a can’t miss image.  At first I did think the head was too large however I quickly got used to it. 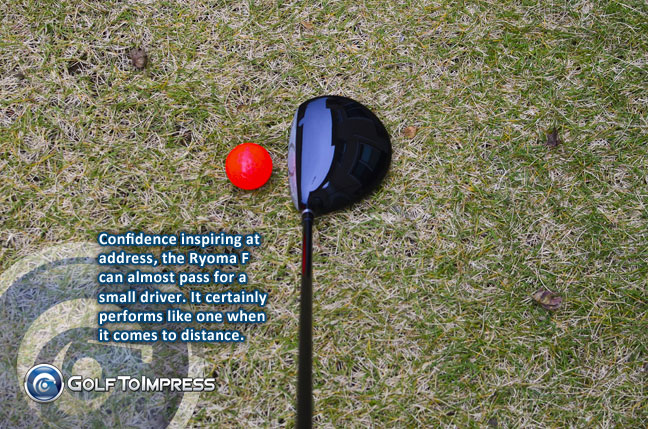 The F2, F3 and F5 models all fall right below 0.83 COR and share the same all titanium monocoque (unibody) construction as Ryoma’s D-1 Drivers. Ryoma is able to fit a 60g Power Booster weight on the back of all the FW models.  Not only that but they also add an additional 60g weight on the front sole called the Spin Control Unit. Considering the 13* weighs 209g, and uses 120g worth of weights, it means the 0.4mm walled body is a mere 89g in weight! Ryoma then plasma welds on their premium forged TDW face for maximum ball speeds and feel.  The F7 and f9 shorter woods have a similar design except use a maraging face and stainless steel body.

Thanks to that 60g backweight, the sweet spot of the Ryoma  fairway woods is huge. So huge that Ryoma claims there is very little difference in direction and distance on off center hits vs shots off the center of the club.  In order to counter the huge weight in the back which in a smaller fairway wood head would push the CG too far back and low, Ryoma uses that Spin Control Unit I mentioned earlier, another 60g right below the leading edge of the head. Ryoma says this weight drastically reduces spin and creates a strong and powerful trajectory that will not lose out to the wind. I certainly liked the trajectory and for me it was more of a mid ball flight. 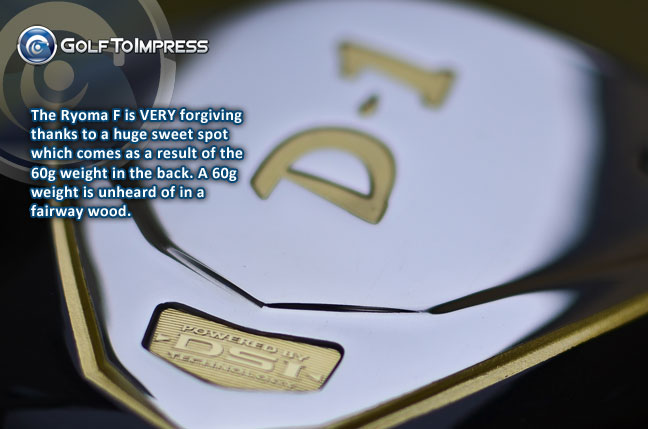 Ryoma has designed the CG Point of their fairway woods to match the ball exactly at impact whereas on some deeper fairway woods the CG point on the face is in fact higher than the point of impact.  The face of the Ryoma’s are considered shallow but not super shallow. They are shallow enough that make hitting off the deck and launching the ball rather easy. I had no problems teeing off with the Ryoma and I felt more confident doing so than with the ultra shallow egg Spoon. The egg Spoon which for me has always been the longest fairway wood, was coming short of the Ryoma by 10-15 yards on average. I also had a TRC FW and ONOFF Fairway Arms Plus as well as a Geotech GT SP and none of them could touch the Ryoma in distance. The testers I have here came with the stock Ryoma shaft. Its a good shaft but a bit on the soft side and the higher torque numbers especially in the softer flexes really do benefit the smoother swinger. I found that if I got aggressive with it, and I do have an aggressive transition and down swing, and if I released early, the soft shaft would cause me to go a bit left.  Even so, thanks to the very forgiving nature of the head, I was still out hitting the egg. It made me think if I had put my preferred Crazy Black FW80 I would gain more control and even more distance. 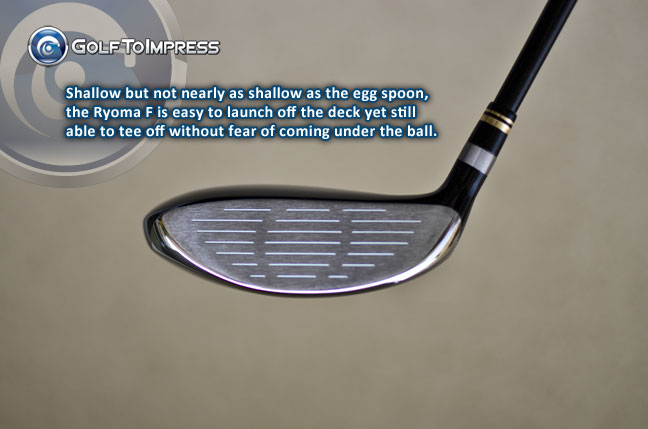 When it comes to sound and feel, at first the Ryoma F reminded me very much of the first generation egg Spoon with that hollow thwock. Its not nearly as loud but the pitch is similar thanks to the heads size and all Titanium construction.  It’s rather solid feeling and while it did not feel hot off the face, it IS hot off the face. There were several times I did not feel like I hit it right on the screws and the ball just kept going, much further than I expected and pretty straight. Much of the results I got are thanks to Ryoma’s huge forgiveness and near 0.83 COR. Considering how much smaller a fairway wood face is than a driver face makes this number quite staggering as many fairway woods on the market feature COR of around 0.70 to 0.75.

At the end of the day not everyone will like the looks of the Ryoma F. Not everyone will like its huge head size. Some people might get turned off by the sound. Others the price. But in the end you have to love the Ryoma F for what it is, and that is stupid easy to hit fairway wood that can probably rival your driver for distance AND forgiveness.

The stock shaft is a good fit for those who are smoother swingers, especially the softer flexes. The stiffer flexes do add some control thanks to lower torque and heavier weights. Many golfers will opt for an upgrade shaft and the Ryoma F is available with any shaft in Japan though more than 75% have gone out with Crazy shafts since they seem to be such good fits with Ryoma heads. If you need help with your selections as always just contact us. If you’d like to go ahead and get the stock shafted model, it can be found in the pro shop.

I took a quick video of the sound at impact. As you can hear its not terribly loud but its not that great sounding either. I also had my egg Spoon and TRC FW on hand and also an egg i+ utility so I thought I would throw that in as well.