In the last year or so, Ryoma Golf has been talked about a lot when it comes to its D-1 Driver. Magazines and blogs all around Japan rave about its distance capabilities. Back in December I decided to introduce Ryoma’s D-1 Driver here on the blog. For those who want the detailed write up and a video please check out the original post. To refresh everyone’s meomory, much of the D-1’s performance can be attributed to ultra low spin and one of the industry’s deepest CG points in a driver. This coupled with their specially designed monocoque body and with walls only 0.35mm thick covering over 90% of the body, the D-1 utilizes a premium design coupled with their DSI or Deep Strong Impact technology.  I had translated a graphic illustrating this which I’ll again post here: 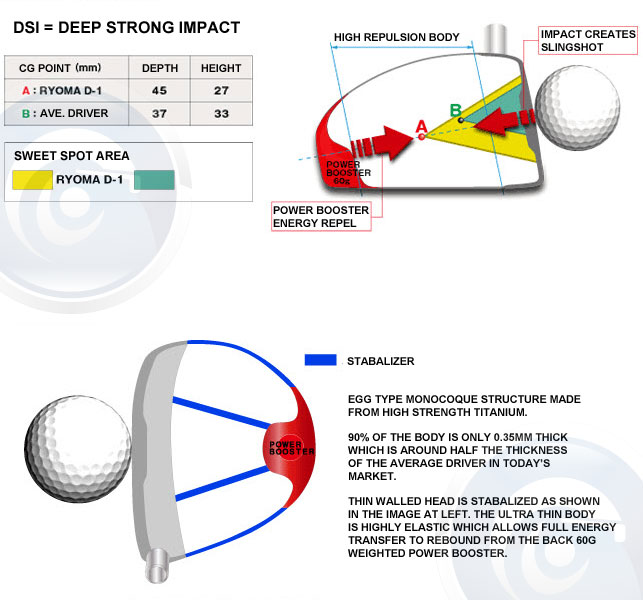 The deeper impact point or CG point creates one of the largest sweet spots in golf and with the walls being so thin, Ryoma is able to place a 60g weight in the back of the head to achieve this. As you can imagine 60g is a huge amount in a driver.  I’m not going to go too much into the tech since I already covered it once but after a month of waiting… the Ryoma D-1 demos finally turned up at my door this morning! I found out early last week that Ryoma had released a new model D-1 V-Spec, an all black driver made for the faster and more aggressive swinger. Because of this later release, Ryoma waited so they could send me all 3 current models, the D-1, D-1 Premia and D-1 V-Spec as well as there most up to date literature. I was very excited to finally get these drivers on hand for some testing. 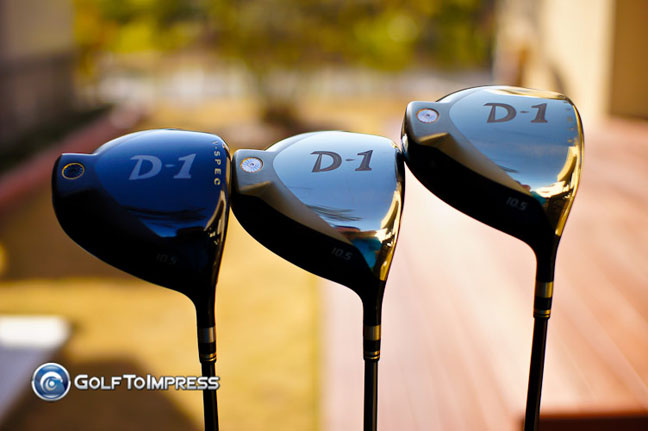 I wanted to give my first impressions of the drivers visually before I get out later next week for on course testing. As you can see from the picture I took above, the 3 models look very similar apart from finish. The dimensions of the heads are all the same while the D-1 and D-1 V-Spec share the same type of Ti face, the D-1 Premia uses a slightly different variation of Ti that is supposedly thinner and hotter (though it is conforming as are the other two). Admittedly, when I first saw the D-1 about a year ago, I very much disliked its looks. That has NOT changed. I still don’t like the logo or the odd shape of the sole. However, logos and aesthetics aside, the workmanship and finish of the driver is very good and clean. This is very important for a premium driver with a high price tag as people who buy them only expect the best. I have evaluated other brands in the past which we ended up not carrying due to poor finish and workmanship not worthy of their price tags. The D-1 models have a very clean face weld (in other words you can’t see it), and very good paint and finish. It’s just that D-1 logo I dislike, which I will certainly forgive if the D-1 performs as it is hyped to.

The original D-1 and D-1 Premia were designed for the average golfer and slower swinger looking for huge distance gains by eliminating bad shots right and providing maximum energy transfer coupled with low spin performance. The D1 and D-1 Premia feature square to closed faces (9.5* is square, 10.5* is 0.5* closed, 11.5* is 1.0* closed and the 13* is 1.5* closed) and a very large gravity angle to help square the face faster at impact. These features are meant to reduce shots right. As you can see from the picture I took above with the standard D-1 10.5* on the right, the face angle to me looks more closed than 0.5*, I’d go as far as saying that’s over 1.5* closed which is not necessarily a bad thing for the slicer. The 10.5* V-Spec on the left however features a square face (the 8.5* and the 9.5* V-Spec are 0.5* OPEN) perfect for the better golfer and faster more aggressive swinger. The V-Spec model is also heavier overall to help stability for higher swing speeds.

One thing I do like visually on the D-1 drivers are the faces. Very clean, very smooth Black IP and Gold IP faces exuding premium high quality. I kind of like the rounded shape as well. Ryoma drivers feature real lofts so if the driver states 10.5* then it has a real loft of 10.5*. I took the D-1 driver (gold IP face on the right) over to our driving range just to hit a few balls to get a sense of the feel. It was my first time swinging a club this year so I was a bit rusty. The D-1 driver however proved to be rather cooperative showing its forgiveness and providing some nice feel and a nice PIKIN sound at impact even on a colder day like today. In Ryoma Golf’s literature that they sent me, they boast that the D-1 and D-1 V-Spec have targets of PLUS 15y gains for players while the D-1 Premia at it’s 46.5″ length (both the D-1 and V-Spec are 45.25″) target a whopping PLUS 20y distance gain. Those are some pretty hefty expectations which I will get to test out on Tuesday. Our neighborhood team is heading out to Hirakawa Country Club a private course about 10 mintues from Kiminomori. It’ll be our first round of the year and I will not only bring the 3 D-1 drivers but also my new non-conforming Quelot Alpha Spec.  I hope my caddy doesn’t get too confused with 4 drivers in the bag and I hope my round doesn’t suffer from rotating through these drivers. (^_^) 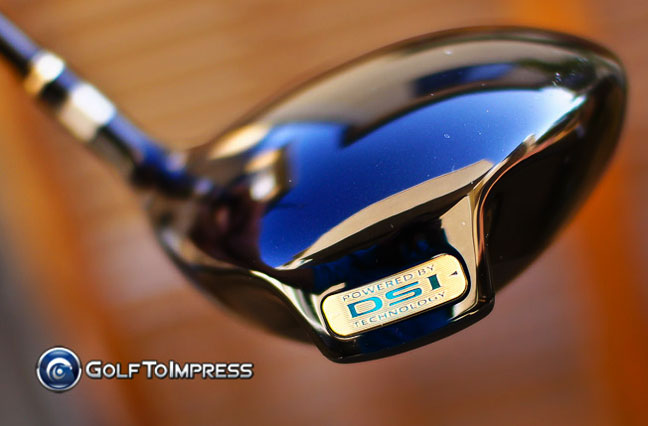 Later this week I’ll post up the performance part of this look at Ryoma’s D-1 Drivers including the drivers performance, including distance and forgiveness as well as trajectory. I’ll go more into depth on the heads and their feel as well as the shafts in each driver. In the mean time here are the pictures I took! Just click on the album below to see the images!