Royal Collection had quite a few new products on display at this years Japan Golf Fair.  Last year we saw the released of the DB forged wedge line along with their Tour VS fairway woods and the popular TRC utility hybrid.  This year RC headlined with the release of their new ENDO produced BBD 105 V Forged Driver that features a 450cc head volume with an ultra thin 0.35mm crown produced via chemical milling along with Endo’s performance enhancing and top grade VL Titanium face.  The body is made of KS100 Ti similar to previous TourStage drivers.

RC’s newest release product is the BBD 505V Utility Hyrbid produced of SUS630 (body) + 455 stainless steel face which creates that satisfying semi crunchy impact we all know and love.  The V sole helps the club cut through the turf at impact, reducing friction and lost swing speed resulting in better impact and better performance.  Available in 3 lofts 18/21/24 with a stock graphite shaft the Tour AD RH produced by Graphite Design thats available in multiple weights from 50 grams to 77 grams.  An optional NSPRO hybrid 100 which is a 99 gram shaft is also available and brings the price of the club down a bit.  I would suggest steel for those who don’t require as much distance yet desire a straighter lower ball flight but most outside of that should go with the graphite. 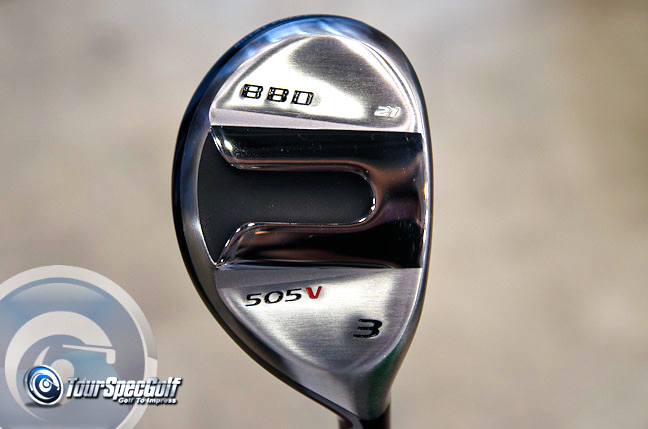 We snuck a peak at a new Royal Collection wedge on the horizon called the DB Milled Wedge which isn’t even listed on their website yet.  Compared to the DB Forged the DB milled features a smaller more compact head shape and size and is also made of soft stainless steel instead of carbon steel.  There are two versions of DB milled wedges one is the straight face with nearly no offset and the other has a small amount of offset. The way to designate between the two types is by the letter T after the words TOUR GRIND.  One of the things I liked most about the DB Forged was how soft it felt and how easy it was to hit.  This new DB milled I have not hit but based on what we saw it is geared toward the better ball striker and tour player who usually requests a firmer feel and that may be why they chose stainless over carbon. As for most amateurs and normal players like myself we tend to gravitate toward softer feeling clubs.

There were several other new releases such as the Royal Collection PRO-TX Tour Trajectory fairway wood which is geared toward the better player as well as many mid to late 2011 releases were also on hand such as the SFD Black series aimed at the golfer seeking more forgiveness.  The Tour VS Driver and Fairway woods and even past models like the Endo Tour VS Forged irons and the RC Forged muscle backs.  Don’t forget to drop into our RC Forum thread to join the conversation (click here) and also check out the full image gallery featuring all of TSG’s high resolution images from Royal Collection at the 2012 Japan Golf Fair (click here).

Below we have a short Video of Tatsuro going over the highlights of RC’s newest clubs,  Enjoy!