In addition to the New egg 7 Iron I reviewed yesterday, I also received a couple of new egg i+ utilities from PRGR. In the past many golfers had purchased the long irons from previous generation egg sets because they were great at replacing their existing long irons due to their ease of use. This time around Pro Gear has decided to release their New egg Iron with only 5-SW available and co-release the new egg i+ as 3+ 4+ 5+ and 6+ utilities.  While there is a little overlap with the New egg Irons, the egg i+ will appeal to even golfers who don’t play egg irons. 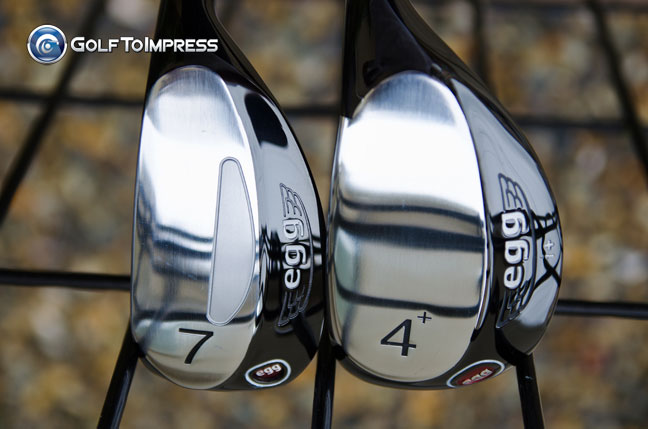 I won’t go into extreme detail since I just reviewed the iron and their concepts are very similar as well as their looks and performance. I’ll instead go over some of the differences and how they feel and perform. Right off the bat you can see in the above image that the 4+ utility which is 21* is has a considerably wider sole.  You’ll also notice that the PRGR i+ utility does not have tungsten in the sole and the reason for that is thanks to a much shallower face and that wider sole, most of the weight is already placed way down low and deep.

Looking at the face profile of both clubs you can see that the egg iron is shaped much more like an iron albeit with a shallow face. The egg i+ utility is even shallower and rounder with a rounded sole and leading edge that much more resembles a utility wood. The CG is just as low and even deeper than the iron creating an easy launch in any lie. The egg i+ utility, like the iron, is made for maximum ease of use and distance.  The 3+ 19* is 40.5″ with lengths gradually decreasing to the 6+ which is 25* and 39.00″. The strong lofts, longer lengths and very low CG create a higher maximum carry ball. 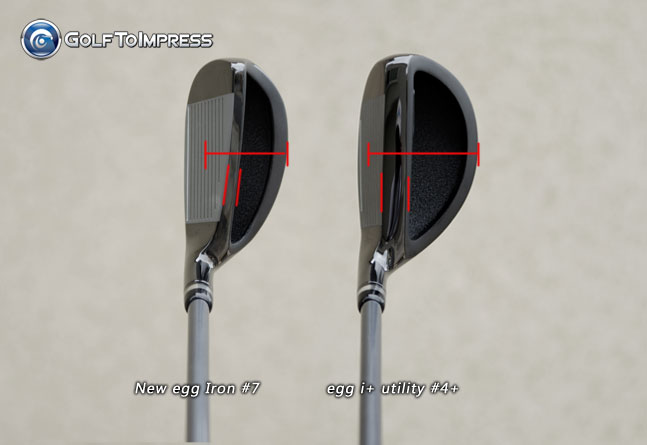 At address both have very little offset. The New egg iron has the thinner top line because the inside of the egg i+ utility is in fact hollow (the iron has a solid face).  The hollow construction provides the feel and forgiveness of a traditional metal wood.  At address you can clearly see the larger scooped out back of the egg i+ utility. It almost looks like a smaller version of the current egg spoon and egg fairway wood and its no coincidence that it does. The proven design from the Spoon has been carried over to the i+ utility and enhanced for utility type usage in any lie. 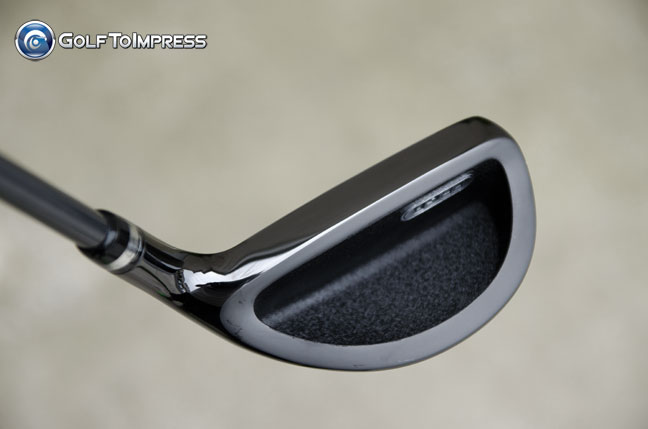 The PRGR egg i+ Utility features slightly different materials than the iron.  It utilizes an even hotter and thinner maraging face called ES230. This is paired with a soft SUS630 body. Feel wise I was surprised when I hit the i+ as it feels and sounds very much like my Titleist VG3 Utility. If you tap the face it has the same tink sound. You can pretty much swing the egg i+ like an iron but it provides the feel and sound and distance of a wood. Distance is fantastic and I hit the 4+ 21* egg higher and further than my VG3 Utility. The VG3 is a 22* but the egg outdistanced it by at least 10-15 yards.  The wide sole makes it very hard to hit fat shots and its shallow face very easy to pick balls purely off any lie.   The egg i+ is very forgiving as hitting virtually anywhere there are scorelines seems to produce equally long and straight distance.

Again the catch for many players will be their ability to adjust to the unorthodox look of the PRGR egg i+ utility. Some people may not know what to make of it, a driving iron? A utility wood with the crown missing? As strange as it looks and as different as its design is, the egg i+ utility is easy to hit long and straight meaning it rightfully belongs in the egg lineup.  The egg i+ utility will launch on August 6th and be available in 19 21 23 25* lofts with PRGR egg carbon shafts. Be sure to look for the pre order this coming week in the TSG pro shop!