ONOFF is about to release their all new 2012 lineup and the first club I’ll look at today is the new ONOFF Iron or as some call it the RED Model. In the past, ONOFF was divided into two lines, the RED line aimed at the average golfer and the BLACK line aimed at the athlete golfer. While ONOFF has done away with the red and black they still separate their models with similar targets. The ONOFF Iron compliments the Type-D line which is now the name of the line that is made for ease of use and max performance. 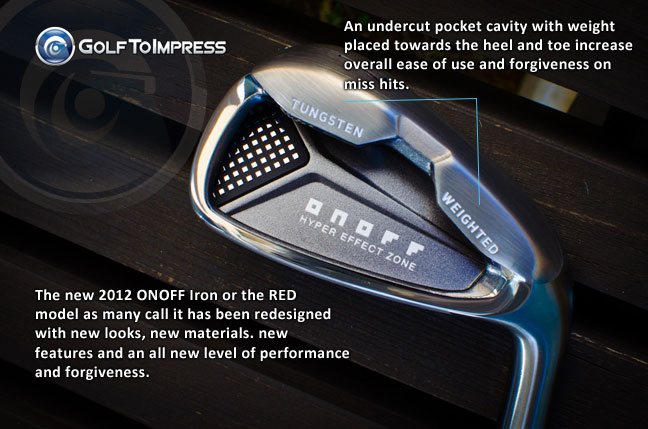 The ONOFF Iron has year in year out been a top performer and pick of the average golfer looking to gain more distance and simply enjoy golf with an easy to use iron. It’s also a favorite of users here at TSG. As I had mentioned in my post the other day, I felt like the previous 3 generations, the 2006, 2008 and 2010 models were all too similar with only minor tweaks cosmetically and design wise. However when I first laid eyes on the 2012 model at their product launch in Tokyo I was very impressed with its new look.  In my opinion its a much better looking iron that previous models and its overall materials, and design have changed as well, all for the better.  Gone is the big red ONOFF logo, replaced with a much more subtle color scheme and brushed satin cavity area. ONOFF has come through this year with some very good looking clubs and the Iron is a bit part of that new look. 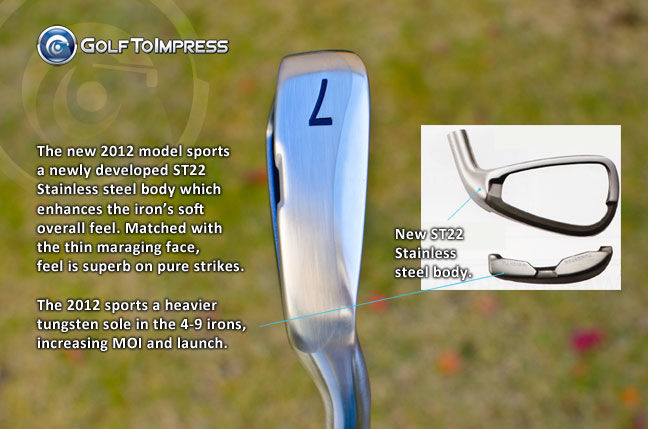 The ONOFF Iron is a stainless steel iron and ONOFF decided to use a newly developed ST22 soft stainless steel to improve the irons feel. Typically most JDM manufacturers will not offer loft or lie adjustments with any stainless models but with the softer material, ONOFF will now do 1 degree changes for loft and lie on the ONOFF Iron.  Like previous models, the ONOFF Iron sports a huge tunstgen weighted sole. The 2012 model features a whopping 78g of sole weight (5 iron) which is their heaviest yet. The weight is distributed towards the back of the cavity and towards the heel and toe for increased MOI and an easy launch. The sole of the ONOFF Iron is wide enough to prevent digging thanks to its leading edge relief but not overly wide to the point where it is bulky. 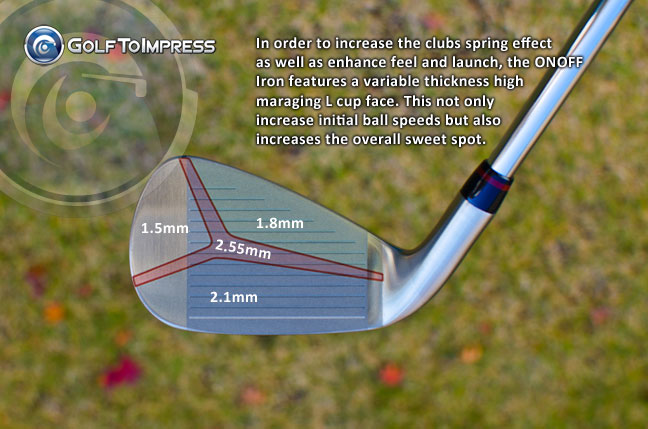 I found the previous 2010 model face profile to be quite rounded and a tad on the large side. The 2012 model is much more eye pleasing face on. As you can see in the picture I took above, I overlayed an image of the variable thickness maraging cup face. The face features 4 areas all quite think except for a ribbed Y area which is 2.5mm. This design creates a larger sweet spot with more spring effect and higher initial ball speeds. It minimizes distance loss and maintains an optimal launch even on strikes off center. It also promotes very good feel and I have to admit I am liking the feel of maraging more and more whether it be in irons like these or fairway woods and utilities as well. 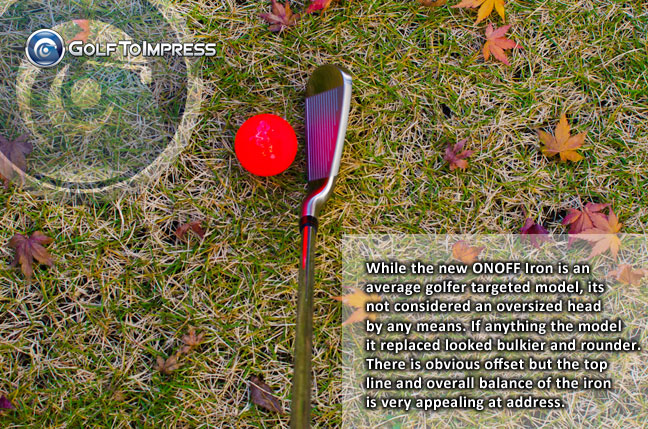 At address the new ONOFF Iron has obvious offset but this is common in more average golfer models to help square the face at impact. It’s not bad looking by any means. The top line is not overly thick or rounded so its actually quite eye pleasing and confident inspiring at the same time. This is one easy iron to hit. The ball launches very easily and distance is superb. Strong lofts and big carry type trajectories will help those in need of more distance get it. I’ll have to say again, I really like the feel. The face feels hot and springy yet rather soft thanks to the thin maraging L cup. The ONOFF Iron is not meant to be a workable iron nor does it pretend to be. It is a performance iron made for ease of use and it excels in that role. The ONOFF Iron comes with both graphite shafts ranging from R2 (54g) to R (58g) and S (63g). ONOFF makes very good graphite shafts (they design and produce their own), so those wanting a light weight iron can go for the graphite shafts for even more feel and distance.  The graphite shafts have dual kick points too, mid and high, which will keep the trajectory from ballooning. The other option is Nippon NS Pro steel in either 850Gh Regular or 950GH Stiff which will suit the slightly stronger player and faster swinger. (Roddio is an option as well from their Labospec division) The iron picks the ball off any lie and gives it a great launch. My bad shot is hitting it fat and when I do I try and adjust and hit it thin out of fear of hitting it fat or incorrect swing adjustments. The sole of the new ONOFF iron was very good and I was able to make good contact on every shot.

Whenever I test an iron as good as the ONOFF, I am tempted to change to it. It looks good, is well designed, feels good and most of all its darn easy to use. Golf is a hard game, we all sometimes forget, equipment should make the gamer easier not harder. If you want more distance in a high quality, great feeling iron, the ONOFF Iron should be near or at the top of your list. If you are a high handicapper or an average golfer looking to get better, the 2012 ONOFF Iron will help you on your way.

We’ll have the entire new ONOFF line in the pro shop in coming weeks. If you need help choosing or advice on the ONOFF or any other model, please feel free to contact us as always.