Golf is very much about feel. Many times you will hear players say, I want the softest iron or I love the soft feel of that driver at impact. Feel is almost always associated with putters which come in all shapes sizes and designs. One thing to keep in mind though is that feel is very subjective and can be perceived very differently from one player to the next. When assessing a putter, besides judging the feel, other aspects that are equally if not more important are the putters ability to put a good roll on the ball and control/accuracy. Many people also look at forgiveness and how a putter sets up or looks at address.

Odyssey the choice putter in Japan…

Here in Japan, Odyssey is easily the leading putter on both the mens and ladies tours and this is reflected in the consumer golf market as well. Odyssey’s popularity leads to frequent Japan only models where demand for different and premium are always high. Earlier this year Odyssey released two new iX line putters, the Black Series iX and the White Hot Tour iX.  Both feature a firmer tour prototype insert tried and tested on the Japanese tours before going retail. Odyssey has been know to make some very soft insert putters but many pros requested something firmer that would provide more feedback and a soft but crisper feel (if that makes sense). I do agree with this as I have used a lot of insert putters in the past including previous White Hot models and Taylormade’s AGSI+ and RSi inserts which are also very soft. What I found was that as I became a better golfer I wanted more feedback and more control something an insert too soft could not provide me. 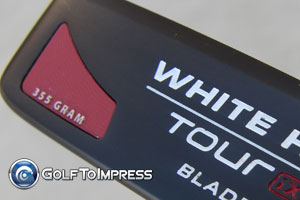 So I decided to try out the White Hot Tour iX Blade. The White Hot Tour iX lineup is the much more affordable line yet features the same insert and black PVD finish that the very popular Black Series iX has. The Black Series iX, despite it’s price tag of nearly double the White Hot iX has been a tremendous seller thanks to its #9 model which is the same putter used by very popular teen sensation Ryo Ishikawa. The White Hot Tour iX line features the Blade and a #5 mallet and #5 center shafted mallet.  All iX putters feature 355g heads in 33″ and 34″ lengths and 340g in 35″ length. These heavy heads do indeed bring the swing weight up there, with my 33″ being around a nice feeling D3 swing weight (34″ models with the same head come out around D8-D9!). I personally believe anything below a C6 or so for a putter is difficult to feel in your putting stroke with a putter ideally being D2 and higher for optimal distance control. When you can’t feel the head it is hard to control it’s momentum thus affecting distance control. So this is a big plus for these Odyssey putters. I really think any putter 34″ or shorter should have at very least  350g head. 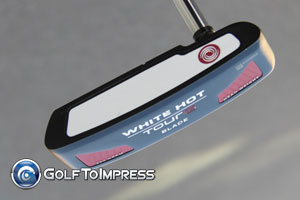 Looks wise, the White Hot Tour iX is a subtle looker with its tour black PVD finish pretty much providing zero reflections.  While the Black Series is almost completely black, the White Hot does have hints of red especially on the sole where the tungsten weights are located. These weights increase MOI and bring the CG back for instant roll on impact.  Before getting this Odyssey Blade, I was playing a Itsy Bitsy Spider AGSI+ which I found too soft. At one point in the summer my putting went to hell and I just lost control of my puts. I had trouble feeling the ball come off the face and the Spider was just so muted I had to make a change. (remember feeling is subjective). I also wanted more control which I believe a blade type putter typically can provide more of so did the White Hot Tour iX perform? The insert definitely has more feedback than the White Hot XG inserts of past models and roll is superb. It is still not quite as firm as a tradtional non insert putter but for many this inbetween feel could be what they are looking for. 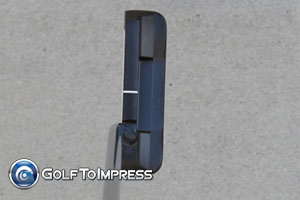 Switching from a neo mallet like the Spider to a blade putter also requires a bit of adjustment in one’s putting stroke. The blade performs best with a bit of an arching putting stroke while I found the Spider best with a straight back and forward putting line. The head feels heavier on the Odyssey compared to the TM putter and this is something I really liked as I feel I had much better distance control with the Tour iX than the Itsy Bitsy.  I would have to say the Itsy Bitsy is one of the most forgiving putters out there as you can almost hit it anywhere on the face and it will still give you good roll however it just was not working for me feel wise. The Odyssey blade is slightly less forgiving but the placement of the sight line on the topline of the putter rather than the flange actually helps me pure the putt rather well so I did not have an issue with forgiveness.

All around performance and value…

The Odyssey White Hot Tour iX series is not a Gold’s Factory putter or a tour Cameron, nor do they pretend to be. They simply sell a lot because for the money, they look good, feel good and simply perform for an off the shelf putter.  If you have a non insert putter and want something just a tad softer, the iX is perfect as it is too if you have a putter with an insert too soft lacking feedback and you don’t want to move away from an insert. The White Hot Tour iX will give you that firm yet soft feel, very good looks and very nice roll and distance control thanks to a deep CG and heavy head weight. All this without breaking the bank. If I had to be picky about one thing is I found the black finish scuffed or marked a little bit too easily, however any damage was not permanent as the marks could easily be wiped away.

A putter is a very personal thing, the Odyssey White Hot Tour iX can definitely fit the bill for many players. If interested, check them out in the pro shop.

Here are some pictures I took: