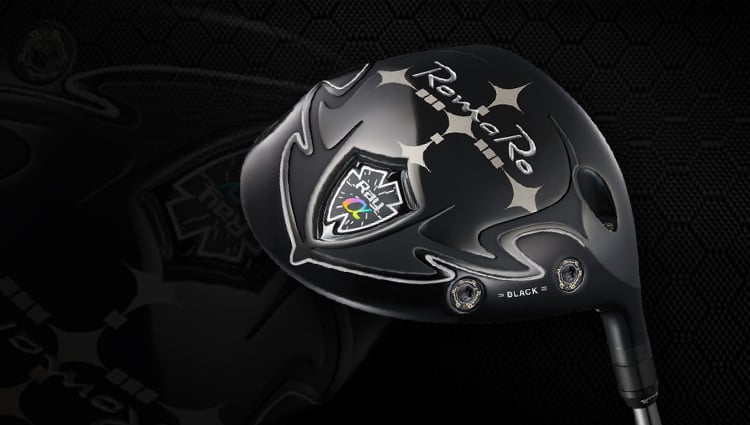 Romaro’s new challenge is packed inside the Alpha Black driver.

In pursuit of possibilities for more distance, for 2020,  Romaro is introducing a new driver with additional adjustability capabilities based on our successful Alpha driver,  the “Alpha Black.”  The Alpha driver has been a driver targeted for active senior players and ladies where a natural swing would automatically produce long drives that do not leak away to the right.  It has been a trusted choice for those seeking additional distances compared to their current drivers.

The Alpha Black features fine tuning capabilities to adjust the amount of bias to the head.  The weight can be adjusted exactly to the needed specs to match the players swing with just the right amount of bias on the head.   This provides the highest confidence with the players where they can just naturally swing away without worrying if the head will return to square at impact.   Users who have been feeling that high MOI drivers have a tendency to stay open face through impact no longer need to worry about that with the Alpha Black because the amount of head turn can be adjusted to match your swing and timing exactly.   We hope you can experience the “forgiveness”  that can be adjusted to your swing with the Alpha Black driver. 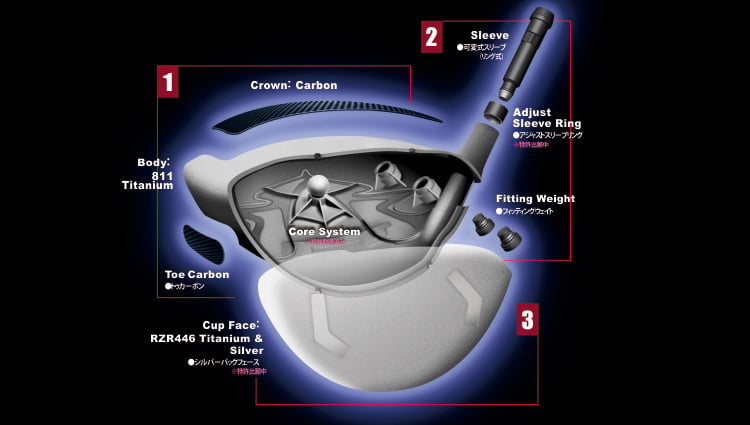 By adopting a carbon on the crown as well as the toe area, the Ti body structure has been made light weight to the extreme.  The weight savings has allowed them to add adjustability to the head for maximizing distance performance.   A section of the toe has been replaced with a carbon piece called “Toe Carbon” which helps to minimize the toe down effects typically experienced with larger shallow heads.   Similar to the Alpha driver,  the high back design reduces drag and helps maintain higher club head speed.   Together with the effects of the core system,  the head possesses excellent balance for high reproducibility and stability through high energy impact.  The cup face with the flex of the crown creates high launch and optimal back spin to produce a longer average distance and longer maximum distance!

The adjustability included with the head are two weight screws on the heel area that allows you to fine tune  the head weight as well as trajectory and bias to exactly how you want it.

A new sleeve ring weight is used to place different weights above the hosel for adjustability of CG height to alter the back spin characteristics.   When a heavier weight is placed high on the hosel,  the CG is raised and back spin is added for more stability to the ball flight. This is unique CG height adjustment methods is one that we have not seen with other drivers and it is patent pending by Romaro! 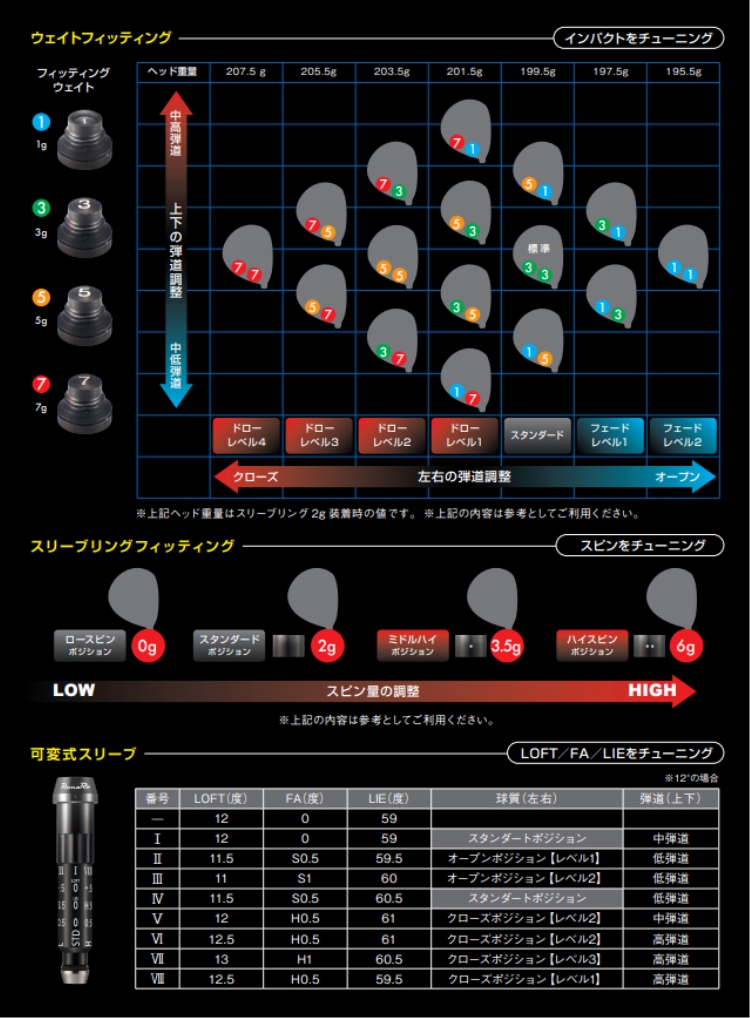 A unique RZR446 Titanium face with variable thickness and checker board pattern Quattro design is used on the forged cup face.  There is also a Silver Alloy piece fused to the toe and heel sections of the inner face to control the COR to be inside the allowed limits while minimizing the energy loss from over flexing of the face.   The high initial ball speed areas extend vertically on the face providing additional forgiveness with off centered hits.  The sensation of the ball staying on the face longer to push the ball through impact helps capturing the ball with stable spin and allows players to enjoy a sense of control to their drives with the longest possible distance performance! 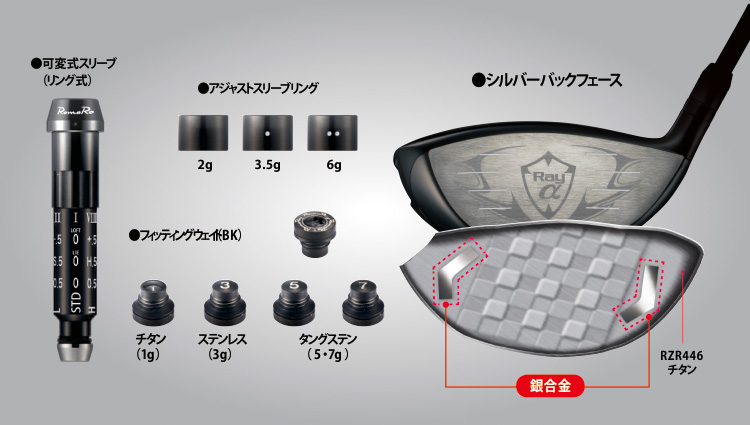 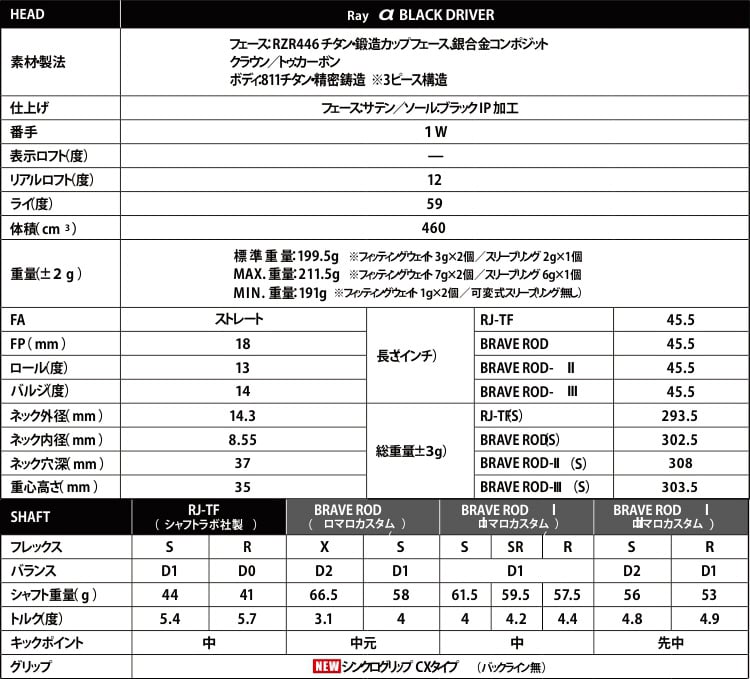 The RomaRo Ray Alpha Black Driver is scheduled to be released by mid July 2020,

The head sits nicely with good stability at address with very traditional attractive looks known with Romaro irons.   The deep and wide pocket cavity design  in a single piece carbon steel head structure greatly helps in  expanding the effective hitting area vertically and horizontally.   In addition to the increased initial ball speed, easy of launch and directional stability have bene improved.   Irons that helps decrease the chance of mis-hits for golfers seeking accuracy and distance with their iron play.  Here is another Type R irons for those discerning players. 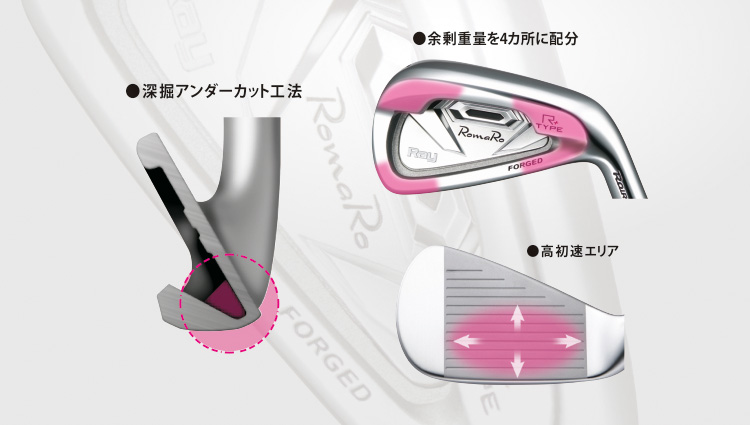 A “Deep Milling Undercut process” is used to mill out the bottom of the sole area in the pocket to the absolute thinnest that structural integrity allows it to be.  The removed weight has been moved to the four corners on the outer perimeter surrounding the back cavity.   Thanks to the deeper cavity,  the sweet spot of the face is expanded vertically and horizontally.    Even the area low on the face typically regarded as a mis-hit area will result in a good shot.   The wide sweet spot area created by this frame like structure pushes further the ease to launch the ball higher with faster ball speeds resulting in more distance.

“3R sole” to swing through with peace of mind

The slightly wider sole has a rounded leading edge, sole center, and trailing edge. It is easy to pick up the ball and is easy to pull through the turf, it prevents chunky shots upper blow swings are not punished.  This sole design helps players maintain high club head speeds through impact even with “not-so-perfect” swings.

Copper underlay plating on the bottom layer of the carbon steel head contributes to stable spin performance due to longer contact time with the ball. The ball sticks to the face to create a unique soft feeling. 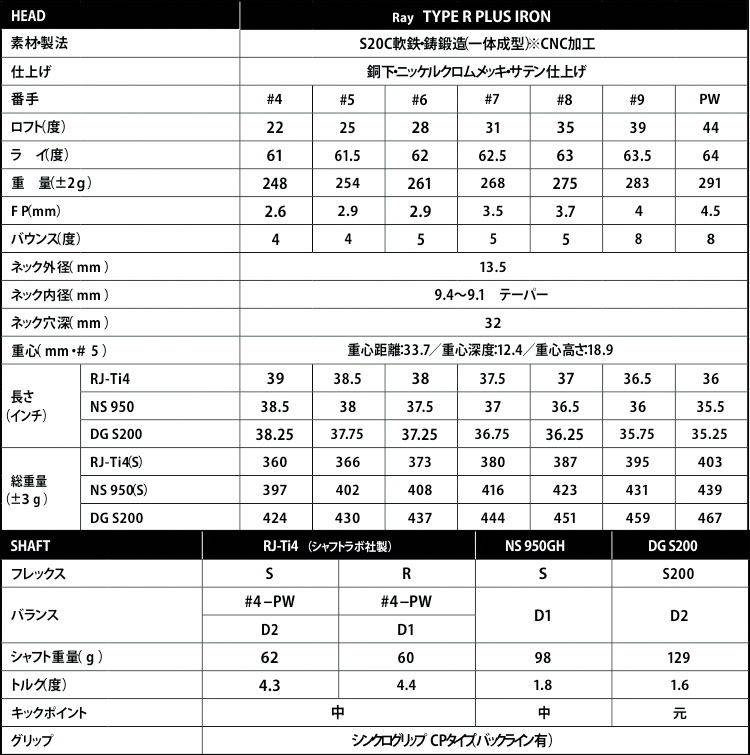 The official release date of RomaRo Ray Type R Plus Iron is on Mid July 2020, however, Tourspecgolf offers a PRE-ORDER for this iron so you can get it as soon as it is released. 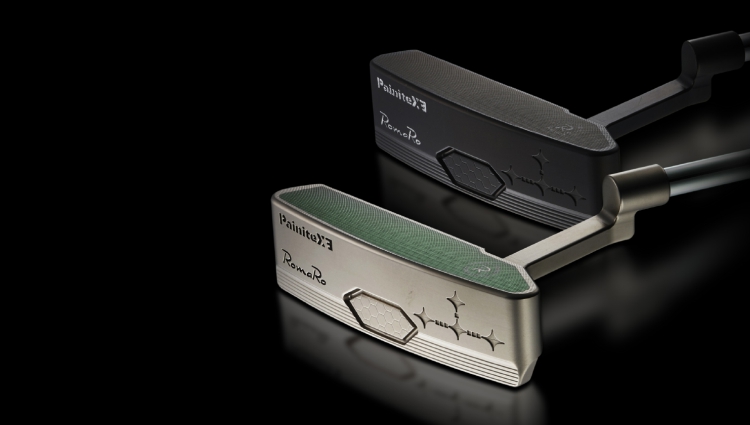 Introducing Romaro Painite X3 Putter. A new idea putter where the shape can be transformed by swapping the bumper / wings with optional pieces.

The basic shape is an orthodox toe-heel balanced blade putter.  With an almighty finish that is easy to use for those who make strokes by opening and closing the face in-to-in, and those who make a straight stroke.

By attaching the optional “wing back” to the bumpers, you can convert the putter to one of three shapes: “blade”, “short wing” and “long wing”.  Each has a strong straight line, which makes it easy to aim at the target, and can be customized on the extension of the familiar blade putter. 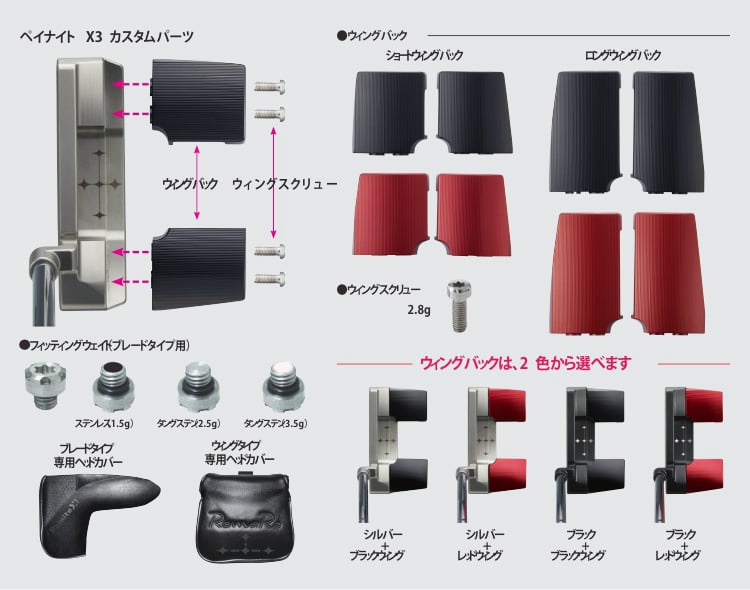 Fitting weight screws are available for the blade shape. Wing types can be chosen between short and long wings that are attached using wing screws.  You can choose the respective wings based on the golfer’s stroke style, impact strength, and ball setting.  Romaro made it possible to customize the feel of the stroke without significantly disrupting the swing weight.   In addition, the unique color milling was applied to the face surface to produce a different feel using micro milling technology.  “Silver is designed for milder feel” and “black is designed for a more solid feel.”    There are also two colors available for the wings black and red for your preferred color combinations with the putter body.

The Blade type concentrates the weight on the toe and heel to prevent the face from wobbling on off centered hits ensuring directional forgiveness. With a moderate center of gravity angle and offset, it is easy to turn the head over through the stroke.  It reduces mistakes to the right.  Easy-to-use shape for straight strokes and arc strokes.

Strokes are easy to stabilize with a larger head, and roll out of the ball does not change even with off centered hits. The heavier weight of the head allows better roll out which makes it easy to putt the right distance on longer putts.

A large mallet shape with an orthodox crank neck.   Easier alignment and easy to use for players with hand first stroke as well as those who have pendulum like strokes.  The forgiveness level of this shape is similar to that of a full mallet putter.