The original Newing Brill released a couple of years ago has to be one of the most highly touted and best selling distance balls in Japan in a very long time.  I still play the original Brill up to today for its superb feel and automatic distance. I kept wondering when Bridgestone would replace this performer and what they would come up with to take its place. A few months ago the Brill was discontinued and nothing new was announced. I could not figure out why something was not released right away to replace such an awesome ball. Then this August, Bridgestone announced a new ball, simply called the New Super Newing which would be the Brill’s successor. 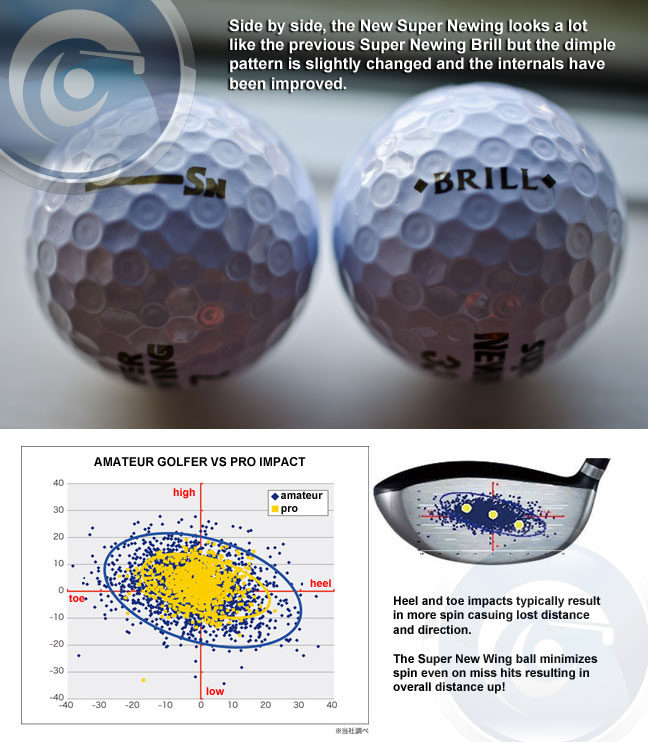 On the outside, the New Super Newing looks very much like the original Brill. As a matter of a fact besides the different alignment mark  and the subtraction of the word Brill, they are pretty much twins. However upon closer inspection there seem to be some minute differences in the Web dimple pattern which both still number 272. Bridgestone took its time wondering how they could improve one of the best distance balls ever. They decided they would do so by making it more forgiving than any other ball. They took data analyzing the driver strike pattern of the amateur golfer vs the pro. Distance balls perform best when struck in the sweet spot where the driver can produce the best ball speeds and optimal amount of spin. However as the data shows (and to no one surprise), amateur golfers don’t always hit the center of the driver, as a matter of a fact they can be all over the face. Miss hits off the center create more unwanted back spin and side spin creating lost distance and direction. The Super Newing was designed with minimizing excess spin and distance loss in mind. 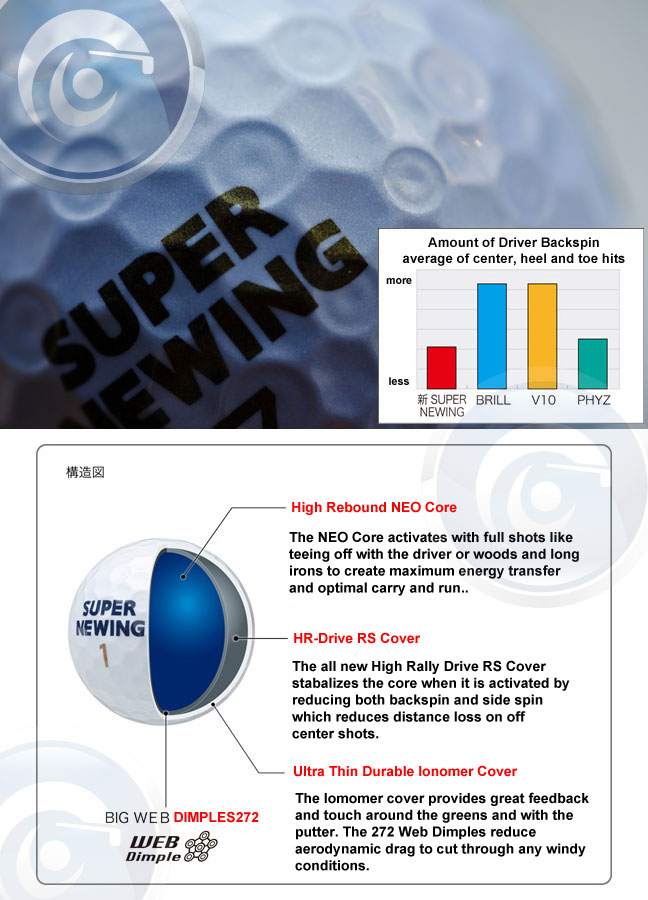 The 272 Web dimples used by the original Brill and the new ball were already designed to reduce excess spin. Bridgestone further enhanced its distance performance by creating the New Super Newing with changes to its inner structure.  The NEO Core is activated by full shots like the driver, fairway woods and long irons. This core creates maximum energy transfer and acts like a superball jumping off the face of the club. However power requires control and stability so Bridgestone incorporated an all new HR-Drive RS Cover which envelopes the Neo Core and stabalizes and reduces unwanted spin especially on miss hits, reducing unwanted slices and hooks. Bridgestone tested the New Super Newing against other Bridgestone balls including the original Brill and found that on average backspin numbers were way down on hits all across the face resulting in straighter and longer shots and overall distance up. The NEO Core couple with the thin Ionomer cover result in very soft feel, even softer than the original Brill. This provides very responsive feel and touch for wedges and putters and enhances play around the greens.

This post is more of an introduction than a review of the ball as its difficult to fully give a review of a ball without truly playing it for many rounds, with different clubs and in different conditions. However I like what I see and feel and from just practice putting and chipping here in Kiminomori, the ball does indeed feel softer side by side against the Brill.  Tomorrow will be my first chance playing a round with it at Nouvelle GC which I frequent regularly with the original Brill. It will be fun to see straighter and longer distance! We’ll be adding the New Super Newing to the pro shop later this week so please check it out!

There is a Yururi for Everyone