Miura Giken Japan’s 2000 series irons have always been considered the most balanced of all Miura models. While the compact 1000 series squarely aimed at the single digit player and athlete golfer, and the Passing Point series allowing the average and weekend golfer to play forgiving Miura irons, the 2000 series sits right in between in fact overlapping both target audiences. By being the best all around series in the Miura line, it also takes the title of being the most popular line. The new CB-2007 encompasses all of the previous 2000 series model strengths and takes it to a new design level. We’ve seen the 2000 series advance technically away from the simple traditionalist designs to heads focused on CG placement, flowing and symmetrical shapes across the sets to increased MOI and a focus on bringing all around play to a a new meaning. 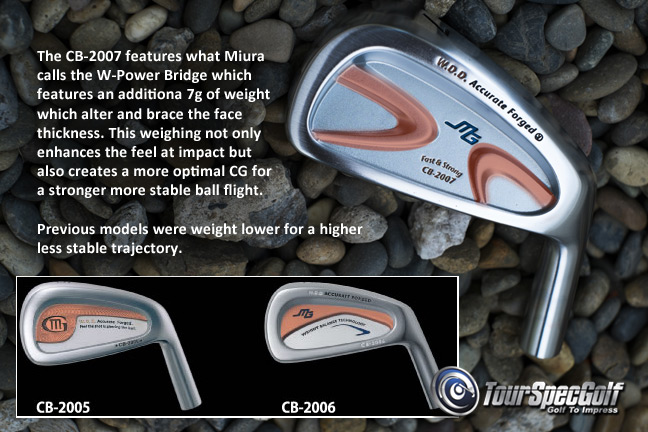 Miura sent over their new CB-2007 for me to check out and I have to say it follows in the footsteps of the new CB-1007 cavity back and MB5000WC wedge in that it is very good looking. It has all the usual Miura stampings which are probably more words than the iron needs on the back face but this is something we have all probably gotten used to.  If they could have only moved W.D.D. Accurate Forged to the neck and not put “Fast & Strong”, the iron would be even more visually appealing but oh well, I’ve given up on lecturing JDM brands about cluttering their iron heads with too much stampings.  The first thing one notices is of course the, almost like hooks in the back of the cavity. This is what Miura dubs the new W-Power bridge. In Japan, W is commonly used for DOUBLE  in case you didn’t figure it out. The two hooks or swooshes or bridges as Miura calls them, total 7 extra grams in weight and not only bring the CG  tad higher in the head but also create a variable thickness face which enhances feel and supposedly creates a larger sweet spot. 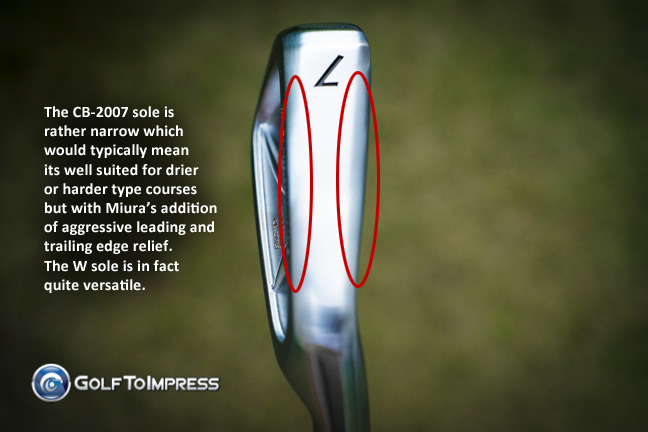 The CB-2007 is not ultra compact but its not bit either. Miura is great at hiding the size of an iron through its individual physical aspects. Even in the Passing Point irons, Miura does the same visual cues that act almost as optical illusions in making one thing the iron is small. The same thing applies here as the supposedly bordering on small to mid sized head looks mall thanks to a thin top line and narrow sole. The narrow sole features a W sole grind (yes double) which has aggressive leading edge relief and trailing edge relief. Courses in Japan are very lush and soft so the W sole grind helps with versatility. Golf is all year round here and courses can dry up and harden in the winter where the narrower sole comes into play making this an all year round sole. 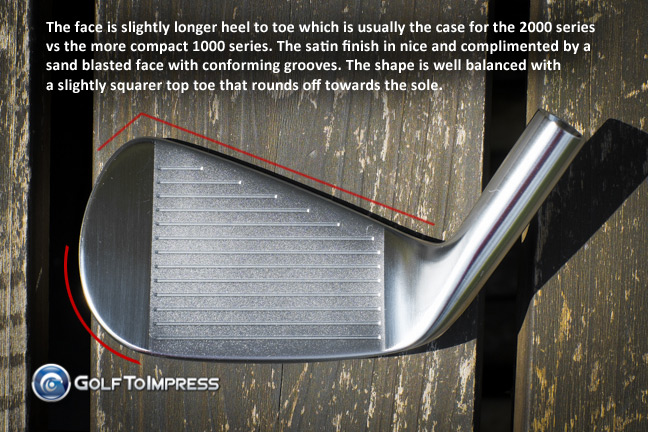 The face of the iron is longer heel  to toe but the straight top line slightly squarer and taller toe give it very good balance and again the appearance of a more advanced iron.  One thing Miura has down is finish. They tend to always go the route of a satin finish which I personally like much better than chrome.  The face is sandblasted which gives it a bit of a “glitter” but this is to add additional friction to create spin.  The head is actually a tad larger than the previous generation CB-2006 with the exception of the hosel being  a tad shorter which tightens up control. But truthfully any difference in size would probably not be noticeable to the naked eye since it is 1 or 2 mm here and there. 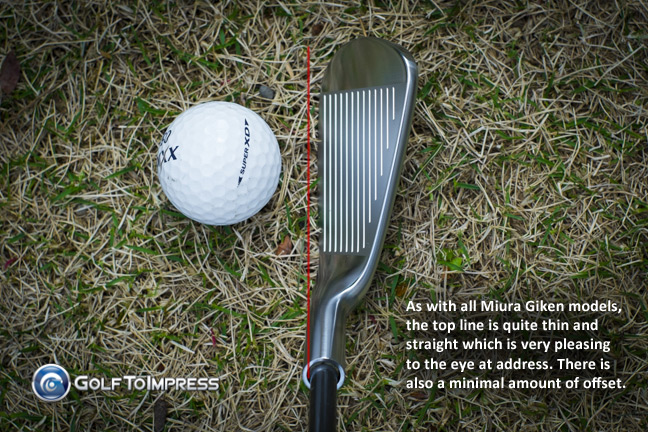 Looking at the CB-2006 at address, you really get a sense of how thin the top line is. The finish, the shape of the face and neck including very slight actually give the CB-2007 a pleasing and balanced look. As you can see it is not a big head in anyway though you can see the longer blade length. I only received the CB-2007 as heads and have just a couple of days with them before I send them off to Tourspecgolfer to be shafted up for testing in Vegas.  So these are only my impressions of the the iron visually and design wise.  I like what I see and I think that Miura really has improved a lot in the design aspect of their clubs lately and are catching up with the times. The W-Power Bridge is a nice touch and the overall design balance of the CB-2007 will make it appealing to better players who would like a tad more forgiveness as well as improving golfers who want a forged cavity back to take their game to the next level. The new Miura Giken CB-2007 is shipping now and available in our pro shop!