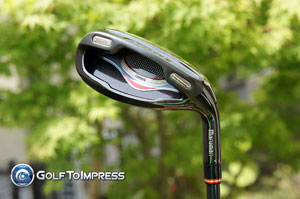 In the last 2 years, PRGR’s EGG irons have garnered tons of press as being the easiest and most forgiving average golfer irons on the market. Maruman Golf released the Mega Shuttle i3000x Iron, a similar hybrid style iron boasting similar performance and ease of use. So far magazines have chosen both as being the easiest, highest launching, longest distance irons in Japan.

So how does this new Mega Shuttle iron feel and perform? Let’s take a look first at some of the features of the i3000x before getting on to my testing with a demo 7 iron.

All Maraging and tungsten design…

The i3000x is plasma welded from 2 kinds of maraging steel, Maraging 200 for the body and Maruman’s Toughest Maraging  771 for the face. The hybrid style i3000x has a wide sole and boasts the highest MOI of any iron in golf at over 3000g/cm2 and the largest gravity angle of any iron at 19.6* (the larger the gravity angle, the faster the face squares up at impact avoiding an open face and pushes and slices). The huge and deep cavity back (as you can see from the picture on the top right) and wide all tungsten sole allow the CG to be placed at 8.93mm deep, 218% deeper than a conventional iron making it unbelievably easy to get the ball in the air for high launch and max carry.

Lightweight and strong lofts for distance… 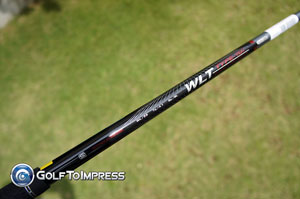 The i3000x is also features lighter weight and longer club lengths with very strong lofts (25* 6 iron) meaning a regular flex player who swings 90mph or less can hit their i3000x 7 iron 160+ yards!  These are very similar specs and numbers to PRGR’s EGG II irons.  The wide tungsten sole is supposed to reduce digging and fat shots and the gravity angle and offset make this iron very hard to slice. The Mega Shuttle are available only with graphite shafts specifically designed for the i3000x providing smooth feel and kick. Maruman touts the i3000x as the ultimate average golfer iron for those looking for distance and ease of use.

So what did I think of the i3000x? At first glance, it is easily mistaken for a hybrid. It is bigger, thicker, wider than any iron in the Japanese market save the PRGR EGG II and even at that, the i3000x seems bigger than the EGG because it sports a larger face. It is true to it’s Shuttle name in that it is like a space shuttle, sleek and advanced looking. Yes sleek even for a bigger iron as the black IP finish and subtle design points make the iron look very high tech.  This iron is definitely not for every one visually. Some may find it simply too large, but others will find comfort in it’s ability to imposingly frame a golf ball, with that can’t miss aura.

You can’t hit this fat…. 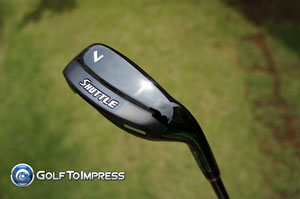 The Shuttle i3000x is very easy to hit. I have a steep downswing and I can occasionally hit fat shots so my first inclination was to see how this iron would react to digging and a steep down blow. I am happy to say these irons are very difficult to hit fat or dig,  they slice through the grass easily even with a steep angle of attack thanks to the wide sole, blunt leading edge. The sole is in fact a dual level sole meaning the front half or about 60% of the sole is lower than the back of the sole creating essentially a huge amount of trailing edge relief for easy ground clearance. A forgiving grind allows a player to make more pure contact with the ball and that’s exactly what the i3000x sole does. Another thing to note is that unlike the PRGR EGG irons the i3000x sole gets wider as the irons get shorter. 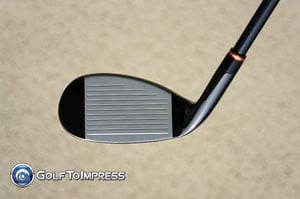 The face area of the i3000x is on the large side and due to its huge under cut cavity is very forgiving all across the face.  If you look at the picture on the right you can see it has an interesting non traditional shape unlike other irons (it’s actually more egg shaped than the EGG!). It is shallow and long from toe to heel and rounded. An all maraging iron as quite an interesting feel to it. It’s almost a cross between forged and titanium faced irons,  soft but with a click or tink to it almost at impact. Purists and traditionalists may not like it as its definitely a feel and sound that takes getting used to. Average golfers probably won’t care as the amount of forgiveness and the distance achieved will easily out weigh the different feel. Please note I’m not saying it is bad feeling. I’m saying it is different feeling. I play all kinds of irons, and I kind of liked the feel.

Now here is the good part (besides being ultra easy to hit), these irons launch high and long easily. With the strong lofts, graphite shafts and hot maraging face, thes i3000x creates tremendous distance.  Using Stiff/Regular graphite I could hit the 7 iron 165 – 170 yards (more than a full club longer than my XXIO).  The i3000x is meant to launch high and carry so it will excel for those with slower swing speeds or have trouble getting a ball in the air. Because of the strong lofts and strong distance the i3000x actually feature a 10 iron between the 9 iron and PW to properly fill the gap (otherwise the PW would be a 130-135y 41* club for most average golfers but instead that is the 10 iron)

It has it’s niche…

So for the average to beginner golfer looking for the easiest set of irons to use and maximum distance, the i3000x is a great non traditional choice. Along with the PRGR EGG II, there are probably no easier irons to hit high and far. The Shuttle i3000x features modern looks, interesting feel and top notch materials. However, because of the materials and design the negative is the price which is quite a bit higher than typical cast or forged irons. For me its a toss up between the PRGR and Maruman, you can’t go wrong with either if you want high launch distance in a very easy to use hybrid style package.

The i3000x are in the pro shop here and you can check out the pics I took below.