About 2 years ago when we first introduced Kamui works to our readers and customers, their Silver 456  driver became quite the hit thanks to its unrivaled custom options, superb manufacturing and workmanship and of course its great feel and performance. However in recent months, 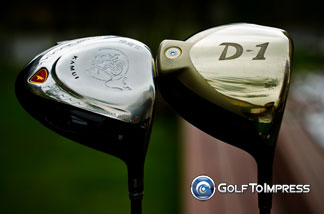 Ryoma’s D-1 Driver has not only taken the crown as one of the best performing drivers ever, it has also run circles around ALL other Japanese drivers when it comes to sales. Honestly when I first introduced Ryoma earlier this year, I would have never predicted it’s current success and demand especially considering how high end a product it is and its comes to cost.  This goes to show that people are certainly willing to pay if a club performs which the Ryoma consistently does for most customers.

Since the release of the 456, Kamui has released a smaller 420 model which is aimed at the better player wanting a compact head. In this new year, Kamui knew, in order to compete with Ryoma – or simply make improvements for that matter, it would have to release a head that could match up with Ryoma in the ease of use and forgiveness category. The Ryoma gets its big distance gains not only from its hot face and superb design but also simply because it is very easy to hit and unbelievably forgiving, meaning even off center hits produce just as straight and long shots as those hit right in the sweet spot. Overall Ryoma players see more distance because of this.

I’ve been gaming the Ryoma for nearly 6 months with no desire to change to any other driver. I used to game a Kamui 456 which I loved the feel of, however I find the Ryoma easier to hit than the older 456. When Kamui Works announced the new Ray driver which I have already introduced in several blog posts, I looked foward to having one custom made for myself and to compare head to head with the Kamui.

Firstly looking at the design of the driver head can usually tell us a lot about the drivers target audience and playing style.  Side by side, the new Kamui Works Ray has the shallower face and shallower head of the two.  This is usually the sign of a lower and deeper CG and a more forgiving head favoring misses towards the toe and heel.  The Ryoma which we all know is as forgiving as a driver gets, kind of bucks this conception by featuring a slightly deeper face and a higher back design. They both feature back weighting with the Kamui using a pair of 5g weights, one in the heel and one in the toe and the Ryoma with that monster 60g power booster weight right in the back.  So even with the higher back head, the CG is in fact lower and deeper in the Ryoma thanks to the weighting and monocoque body with the thinnest walls in golf. Loft wise the Kamui is a 10* and the Ryoma is 10.5*, both feature real lots and on measurement are pretty much right on.

Both drivers have very nice looking faces and very clean top lines. The Ryoma face on the right is very symmetrical and has a rounded top and bottom. The Kamui Ray is shallower and based on its shape works to minimize lower heel misses and higher toe misses. You can also see that the hosel lengths are different with the Kamui sporting a shorter hosel.  The longer hosel also shifts the CG slightly higher up in the head which the Kamui probably needs to do in order to balance its launch.  The Kamui features a nice satin top secret Titanium (they still won’t tell me what it is but we will find out soon enough) vs the champagne colored forged TDW titanium face of the Ryoma. 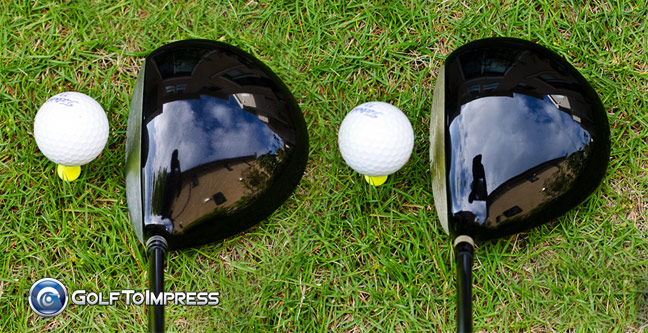 What surprised me was at address both heads look rather similar shape wise. I’m hard pressed to say one is bigger looking than the other at address which is interesting considering that the Kamui is shallow back vs the higher back of the Ryoma which would have led me to believe the head is not stretched back as far as the Kamui. Face angle wise both drivers are supposed to be 0.5* closed. The Kamui looks almost square while the Ryoma does appear closed. We’ve discussed the Ryoma face angle in the past with some noting its almost an optical illusion with the Ryoma created by the way it sits on the ground, unevenly due to that huge hump of a weight in the back.  When swung or hovered in the ai it does not appear nearly as closed.  Kamui specs are always right on thanks to being hand built and constantly measured through the manufacturing process and if anything they are too exact, I could have probably used a bit more closed in reality since my bad shot is right. 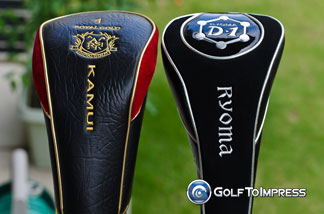 Both drivers are nicely finished and while they are not necessarily my cup of tea when it comes to looks ie graphics, logos etc, that is very subjective and depends on the person. One thing most people can agree on is that they don’t really like the zippered Ryoma head cover which features the model D-1 surrounded by what looks like some sort of molecular structure out of biology.  The Kamui head cover is a nice more classy artificial leather looking sock cover.

Now to the important part. Hitting the drivers side by side. I should note as I had in earlier Kamui Install posts that this Kamui Ray built for me features a 0.88 COR non conforming head – while all Ryoma’s are only available in conforming heads. Both drivers offer quite different feel and trajectory. I should note the shaft will have some affect on the trajectory.  The Kamui was a very stable low to mid launch versus the Ryoma which launched mid to higher (with Crazy Black 46 6.2).  There is a 0.5* loft difference plus the lower launching Axiv V 5058 shaft I have in the Kamui but I could clearly see the two different ball flights. This is not to say the Kamui launched too low or the Ryoma too high. The Ryoma carries more by probably 10-15 yards (for me) due to a combination of an optimal trajectory, plus it rolls well at the end. The Kamui and its very strong trajectory hits the ground and runs… a lot. Total distance between both drivers is very comparable, both spin low and I would consider playing the Kamui on windy days to keep the ball down or on harder fairways where I can generate tons of run, but on wide open courses and those that don’t produce a lot of run, I’d go with the Ryoma.

Feel is very subjective and so many factors will affect the feel of a driver, including, materials, design, shaft and even how the player swings.  The Kamui at impact is more subdued and has more of a soft thud or thwock and while the Ryoma is also soft, it has a higher crispier tink sound at impact.  Because of the Ryoma’s sound, it feels hotter off the face even though the Kamui is non conforming. One thing to note about Kamui, is that they have long been a brand that have focused on designing and manufacturing clubs for the better player and athlete golfer. I’ve always believed that the face of the Kamui feels better at higher swing speeds as its design is thicker. Yes that can equal a softer feel but at lower swing speeds its hard to reap the benefits of the Kamui and its feel. My guess is that at 95mph or above the Kamui feel improves. The Ryoma on the other hand has been designed to create maximum ball compression off the face and you can feel it no matter what the swing speed. This is a key design of the Ryoma to increase energy transfer.  Ryoma believes that the longer hang time on the face creates more energy transfer to the ball thus faster ball speeds.

One area where the Ryoma stands above everyone else is ease of use and forgiveness. Miss hits result in very lost distance and even shots off the toe straighten themselves out. So how is the Kamui  in this respect?  Pretty good and it certainly provides more forgiveness than the former Kamui 456 and 420 models.  The sweet spot is not as large as the Ryoma, then again no driver has a sweet spot as large as the Ryoma. Kamui has done a great job to still create a new stable, workable driver with increased forgiveness. Toe miss hits are not nearly as punished as before but heel miss hits still suffer. The Ryoma wants to go very straight or draw but the Kamui seems much more workable with draw and fade available to the player, at least this was the case for me (actually seemed to naturally fade more thanks to the smaller gravity angle compared to the Ryoma).  In the end how forgiving a driver is depends very much on each individual and can take a lot of time to assess. I will be able to tell better as time goes by and I get to try the Kamui on courses I play regularly. Still if I am swinging the driver poorly, the Ryoma has the advantage. For those who always hit the sweet spot then that advantage might for some be considered a moot point.

If you are looking at these two drivers and are wondering which you should choose, here are reasons that you might consider the Ryoma (not necessarily over the Kamui but in general the Ryoma’s strong points).

Here are reasons that you might consider the Kamui Ray(not necessarily over the Ryoma but in general the Kamui’s strong points).

So in the end we have two very high quality drivers that can satisfy a wide variety of players. I am not going to say one is longer than the other as it really depends on each individual player.  Plus it is far to early to tell if the Kamui can live up to the legendary status the Ryoma has gained in only a few short months. The Ryoma’s standard specs may fit a wide variety of players and give them the most distance and ease of use they have ever experienced however there are also players who are much more picky and need exact specs to fully benefit performance wise ie the right lie angle and the right face angle to match their swing. In the end its about finding the right driver for you and the right shaft to fit your swing. No matter what the driver is, careful research and proper fitting will allow any player to reap the rewards of great performance.  The Kamui Ray and Ryoma D-1 just make those choices all a little bit easier (or harder if you can’t make up your mind!)

I brought the Kamui to the range the other day and I had my D5100 with me so I took a short clip on the sound at impact of the Kamui Ray. Disappointingly I did not bring the Ryoma that day so no video for the Ryoma sound which I’ll do next time.

As always if you need recommendations or fittings for either the Ryoma or Kamui (it is available for order now) or any other club for that matter, feel free to drop us a note.