We all wonder when a new model club comes out whether or not it is better than model it replaced or any older model from the same brand. Kamui Works decided to head up to Fujikura’s testing field where they could use Fujikura’s hitting robot to directly compare the Silver 456 to the new Ray driver.  Testing was actually done back in Fukushima on the morning of March 11th and if that date sounds familiar to you it was the day the big earthquake struck Japan. Because of the disaster, Kamui did not actually get the results from Fujikura until many months after since their Fukushima area base was closed down. For those of you who don’t know Fujikura’s Robot tester, it is frequently used not only for shaft testing but is also borrowed for driver testing by many different manufacturers. Click to watch a video of the Robot in action.

As we know a robot can create a consistent testing environment for clubs by pretty much maintaining constant variables though out a test. Obviously they don’t relay feel or forgiveness (unless they set the robot to hit off the heel and toe) or different styles of swings but the robot is good for head to head, straight down the middle comparisons. On this day the temperature was about 23c with very little to no wind. The Silver 456 and Ray were shafted with identical shafts (they did not reveal the shaft and it is only identified as shaft B) and identical specs (10*, square face) then tested by the robot set to swing at 43m/s and 45m/s taking 5 shots at each speed with each driver. The results were measured by a Trackman and averaged for the chart below.

On the surface it seems very even between the two drivers with the Silver 456 even providing slightly more ball speeds and tad less backspin. The launch angles are close but with both swing speeds the Ray does launch higher than the 456.  They reach a very similar apex (max height) which means that the Ray probably has a more boring trajectory since it launches higher but they reach the same apex.  This also means the 456 climbs higher at a steeper angle from its initial launch which could explain the sharper angle of descent (Landing Angle) resulting in less run.  Interestingly it seems the more boring trajectory created by the Ray not only runs more but carries more as well. 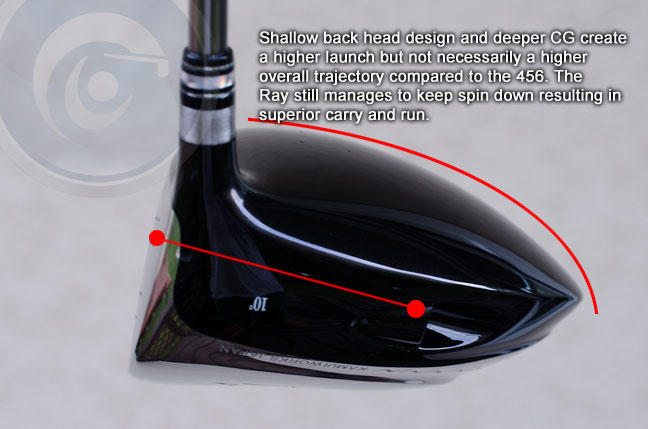 The Kamui Ray’s head is certainly built to be more forgiving and more distance oriented. Its shallower back head is geared to launch higher and still keep spin low compared to its high back 456 counterpart. The deeper CG also increases MOI and when I tested the Ray it certainly seemed more forgiving on miss hits towards the toe than the 456 which I used to game. One thing robots don’t test is workability, the ability to move shots side to side and control trajectory. I’d say the 456 has a slight edge there but neither driver has a huge amount of bulge which opens up the ability to work the ball’s direction more. All in all these are some numbers to consider and perhaps allows Kamui to show that the Ray is indeed a step up from the 456 when it comes to straight line distance. Like the 456 the Ray is built to customer specs by hand and featuring all real and exact specs. If you need help with a custom Kamui feel free to contact us anytime.