Earlier this year Masakazu Abe also known as ABEX in Japan the lead shaft designer at Crazy left the company along with several top craftsmen. It has always been Abe-san’s dream to form his own shaft company so he began Triple X which goes by TRPX a high performance shaft company that uses only high modulus carbon. I first dropped by their head office in Shinjuku back in July to find out the scoop behind the company and it’s products. Abe-san was originally the one who Tourspecgolfer dealt with when we started dealing with Crazy a few years ago, so he was more than happy to talk about the possibility of working with TSG again.

The key behind TRPX is quality and design. Every shaft is of course designed by ABEX and made of high modulus carbon using a new design ABEX dubs HPI or high power impact (more on this later). TRPX is small so the focus is on lesser quantities with higher quality. The Factory consists of 4 craftsmen… thats right 4 people. One person doing each job in the creation of a shaft. One managing carbon prepreg, one doing hand rolling of the shafts, one doing a thorough quality control and spec check and one doing painting of the shaft. 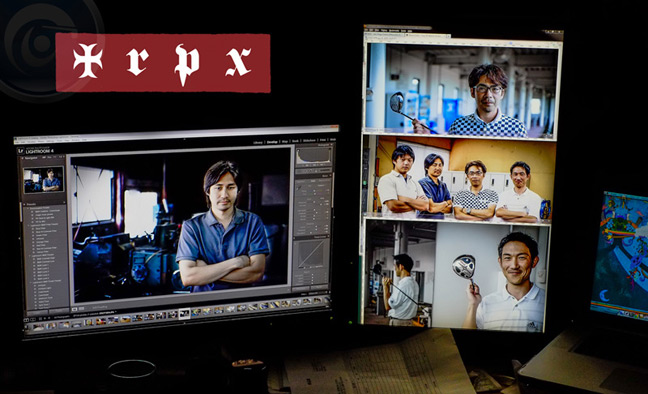 Over the course of the summer I have met with the TRPX staff on numerous occasions both at their head office and factory to watch the shafts being made and tested as well as for some photography opportunities. It’s rare with most large golf companies in Japan to get to know the staff but with TRPX being so small, we thought it would be a good idea to put some faces to the people  behind Japan’s newest high performance shaft company. They were all very cooperative in letting me take their photos so keep reading to learn more about TRPX and their shafts and driver! 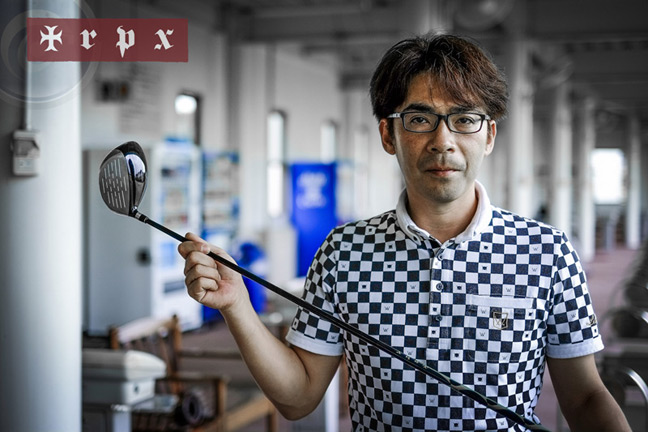 Abe-san (pronounced Ah-Beh) also know as ABEX in the Japanese golf world, is of course the mastermind behind TRPX (as he was at Crazy), the shaft guru and the brain behind the brand. He created all the shafts at Crazy prior to 2013 and now is the face behind the shafts at TRPX. I’ve learned a lot about shaft fitting from ABEX over the years and to spend more time with him this summer hearing about his philosophies and direction for TRPX was truly enlightening. 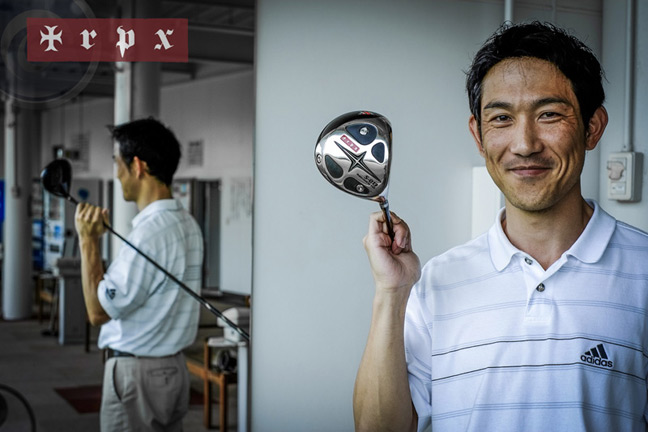 Nakayama-san is the product manager for TRPX and is also in charge of club development like the TRPX drivers as he was at Crazy too. He spent 12 years at Taylormade Japan in the metal woods division before moving to Crazy. He has spent the last few years working with Crazy and Jbeam collaborations and now the original TRPX driver made by Jbeam for TRPX. Currently on the development table for Nakayama-san is the new TRPX Fairway wood. 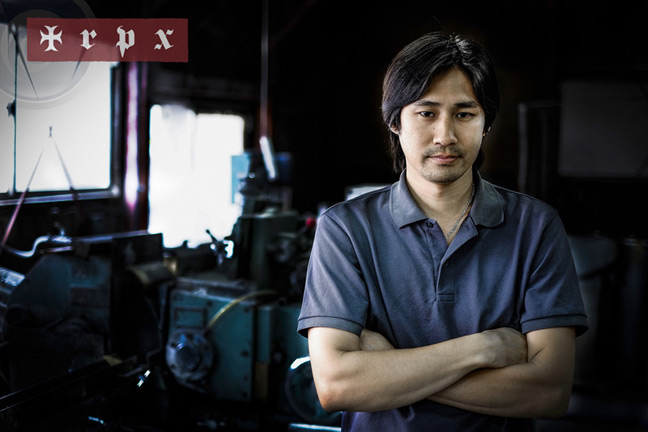 Sekine-san (pronounced Seh-kee-neh) is the top craftsman in the TRPX as he was at Crazy too. He runs the factory and is a high modulus carbon specialist. He pretty much rolls EVERY shaft by hand himself… which is why TRPX models are so limited (Abex said even though these are retail models we should treat them as limited due to supply.) I filmed a Sekine-san rolling a new X-Line prototype while at the factory. I will put that up soon but you can see a few screen caps… 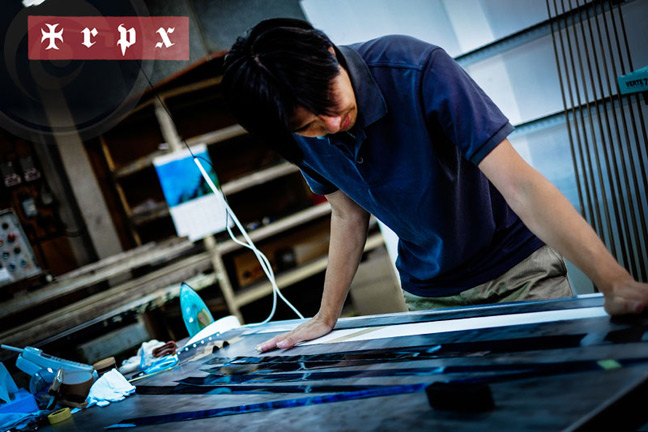 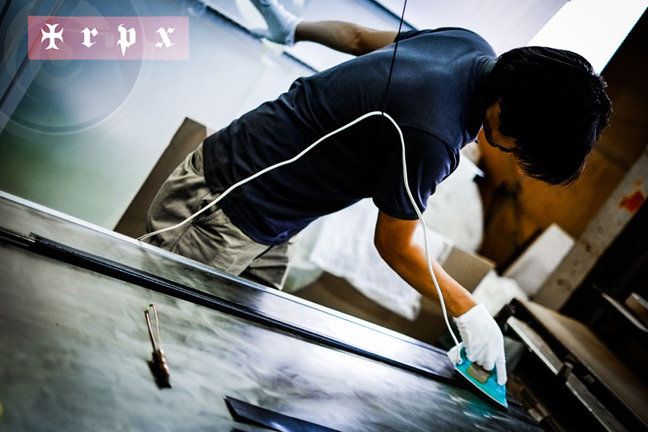 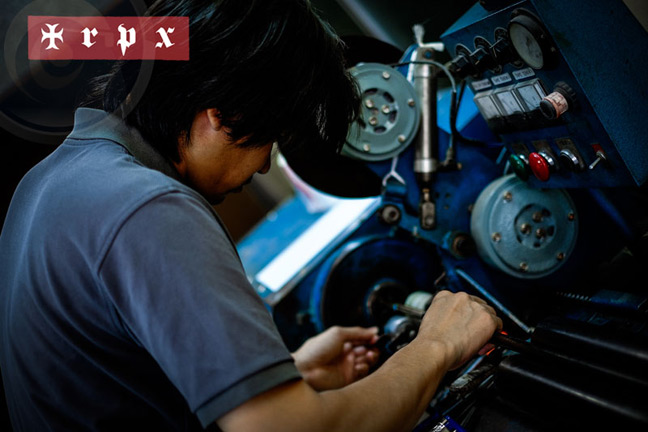 TRPX released their first shaft models back in June the 50t Messenger, the 40t/46t combo Ravie and the 46t Touale. They just released their new X-Line Concept 4 weeks ago to make it 4 models in their current lineup. ABEX looked to maintain the same high performance and quality in TRPX that Crazy shafts had but to also take it a step further by making the shafts more user friendly. While Crazy has its fair share of user friendly shafts, many of the heavier and stiffer shafts were not that forgiving and really need to be swung and swung well for max performance.  Abex and I discussed this back in August over a coffee at Starbucks in Shinjuku. Too many people look at flex and swing speed in a one dimension. Every 100mph golfer swings differently and tempo, transition or as I say swing style plays an even bigger factor than actual swing speed. A super smooth 110mph swinger could excel with an R flex while a ultra aggressive 95mph swinger could use SX flex. But the key to finding the right fit for a player is not simply choosing a flex but as I have discovered over the past couple of years in working with fitters at Crazy and ABEX at TRPX, we look a lot at shaft timing or lack of, and how a shaft matches your swing at meeting the ball. Some shafts require effort when it comes to timing, in other words you need to adjust to the timing of the shaft release while other shafts, the timing matches YOUR swing.  TRPX worked to make their shaft lineup not only suit a variety of swing types but to make the shafts more user friendly in that players did not have to worry about timing and just swing away and let the shaft do the work. 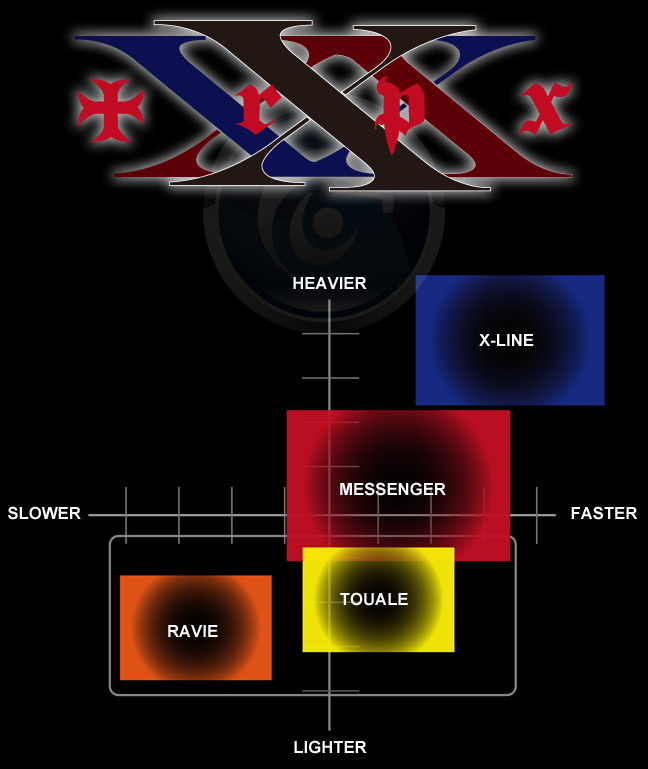 The Raytis line is their ultra lightweight line and range from 50g to 56g.  The Raytis Ravie is an ultra light 50g distance shaft for slower swingers. If I had to compare it to another shaft it would be the Royal Decoration. It plays soft, is easy to load, has a super kick and its primary focus is distance. Those with a smooth swing will benefit from this shaft. Those who are more aggressive, hitters, or those with a late release will have trouble with the timing of this shaft. I recommend stepping up a flex (or two even) if you are not confident with a soft feeling shaft.

The Raytis Touale is a lighter weight mid 50g shaft for slighty faster swingers, it is basically the Ravie with a stiffer profile. I was fit by ABEX for this Touale in a stiff. I am a bit more aggressive at the top as I do not have a full back swing and if I go after the ball I can pull or hook it. The Touale kept up with my aggressiveness and I did not have to think or worry about timing. It produced a mid and more penetrating flight for me and I hit paired with the D-013 for around 230-240 which is what I max out with my Ryoma’s at with my Favorite Crazy LY01 Nero.

The Messenger 1st is a 60+ gram all around shaft. It suits a wide variety of players and is made to have not only good feel and distance but forgiveness. It can handle a semi aggressive swing but those aggressive swingers really need to go for the X-Line Concept. The Messenger so far has been the most popular shaft from TRPX at TSG.

We recommend Messenger Flexes based on your typical distance – these are approximates:

These first 3 shafts are not ultra stout, they play on the softer side (if you compare to Crazy) and are made to provide max feel and max distance.

For those stronger players who are faster and more aggressive, TRPX created and just released the new X-Line Concept, a 66 to 68g, lower torque shaft made for stability and control to go along with strong distance performance.

We recommend X-Line Flexes based on your typical distance – these are approximates: 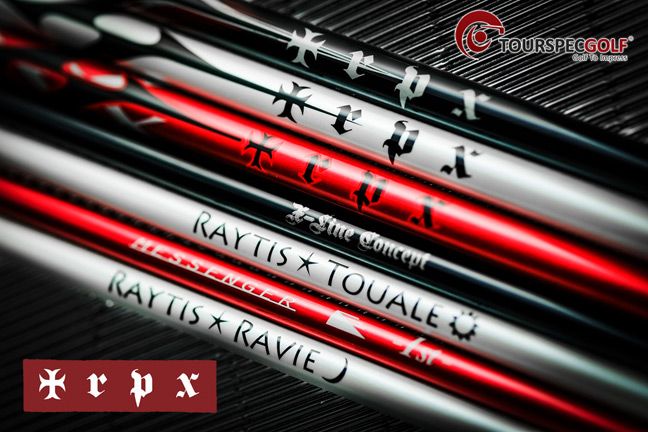 Another exciting aspect of TRPX is their connection to J-Beam. J-Beam’s founder and ABEX go way back and are close friends so when JBeam found out ABEX was doing his own brand they immediately collaborated in creating an ORIGINAL driver for TRPX. The two companies will be working closely together from now on so look for exciting new designs when it comes to metal woods from both brands!  The new TRPX driver features a 2 piece Forged Titanium construction and are available in two models, the deep faced D-013 and the slightly more shallow faced S-013 where the CG is slightly lower and deeper due to the shallow nature of the S-013. Both models are focused on max distance with stability by producing optimal launch angle, spin and maximum ball speeds at impact. TRPX focused on idea weight distribution, optimal CG placement, just the right amount of bulge and roll in order to create a huge sweet spot and minimal loss of energy at impact. 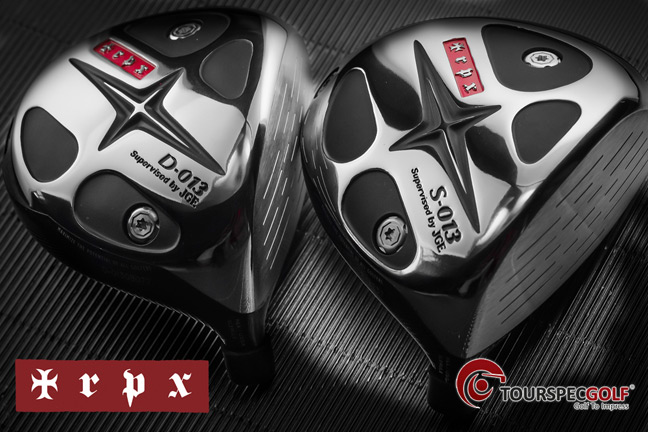 Here is a look at the specs of each followed by a visual comparison. 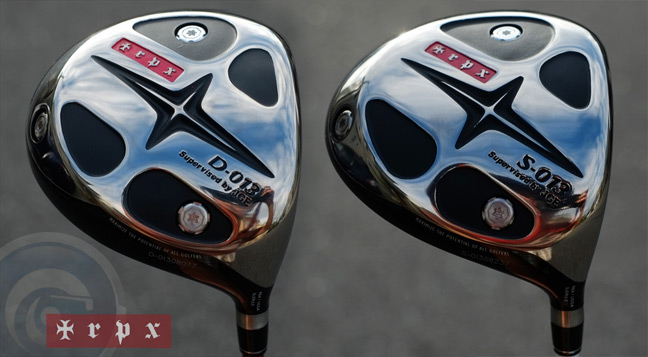 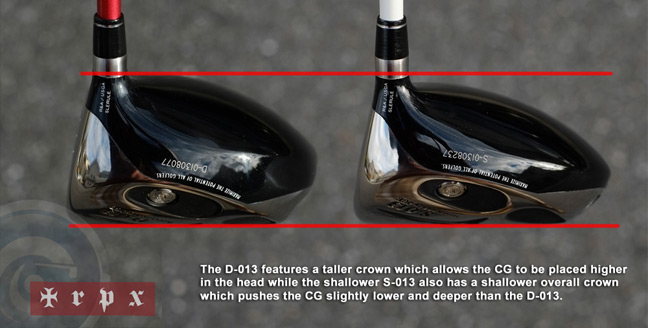 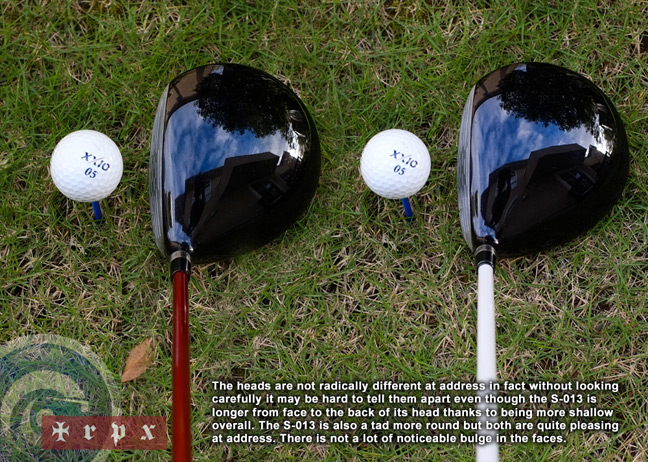 We actually began presale about a month ago with TRPX especially for forum members in order to get some drivers out there for feedback. So far the feedback has been very promising and you can see the review thread on the TSG forum here: OFFICIAL TRPX DRIVERS AND SHAFTS REVIEW THREAD 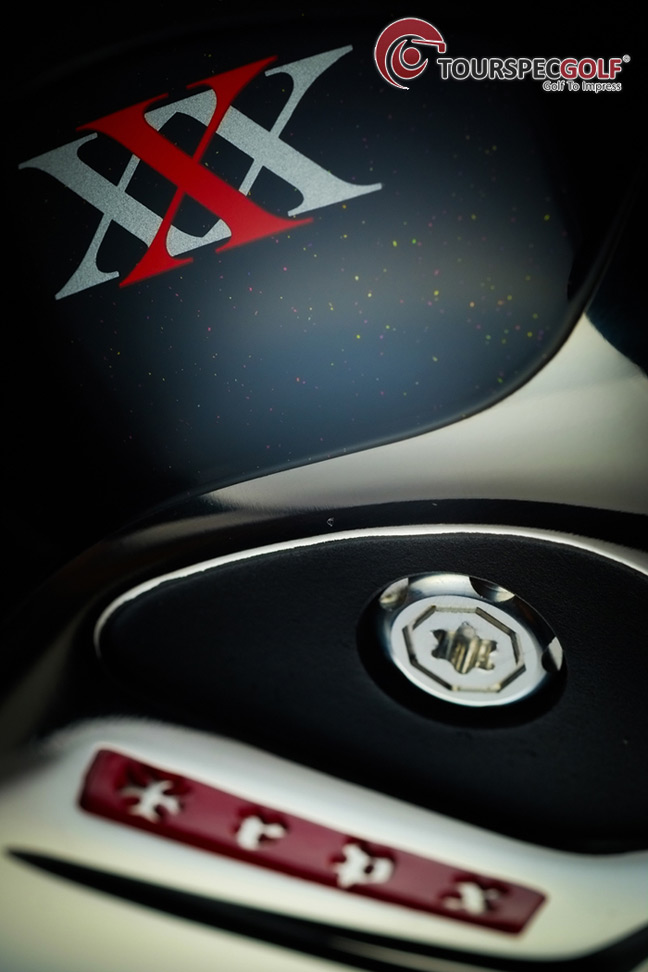