Well it’s time for Part 2 of Craig’s whirlwind weekend here in Japan. If you read Part 1, you’ll know that Craig and I spent the morning and lunch at Gold’s Factory with Master Sasaya, not only figuring out to do with Craig’s putters but also having Craig watch Gold’s Factory at work. It was very exciting for Craig to see his own putters tweaked and worked on right before his own eyes.  After lunch we parted ways with Sasaya-san and grabbed a train back to Akihabara where we switched to the Tsukuba Express train. A funny thing happened on the way to Rokucho Station where we were to be picked up by Crazy. I was joking to Craig that last year when I took Carl (mygreenaliem) to Crazy we were so busy chatting on the train we went right past Rokucho.  After we boarded the train Craig and I got into deep discussions about drivers and irons and about 15 minutes later when I decided to look outside the train I realized we had missed Rokucho Station!!  So we jumped off the train and hopped on the opposite track train only to find out it was also going in the opposite direction from Rokucho! Anyway to make a long story short, we eventually made it to Rokucho where our good friend Ueda-san picked us up to drive us to the Crazy Factory. 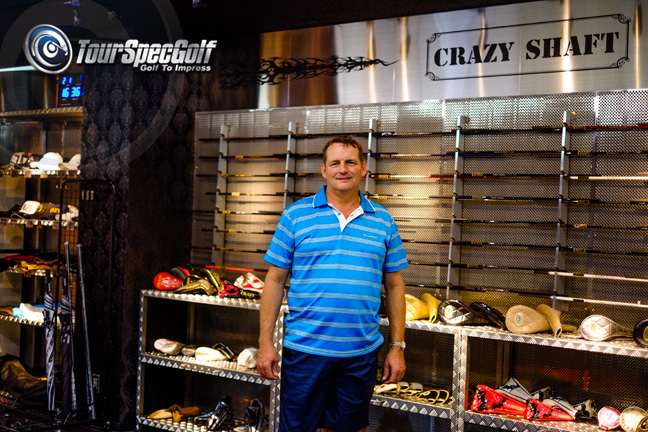 Craig is already the owner of a lot of Crazy shafts and drivers. This was his chance though to try all of Crazy’s offerings as well as to get fit for iron shafts for his Crazy Muscle Backs. We decided to get fit first for a driver shaft and we pretty much had Craig try every Crazy shaft. 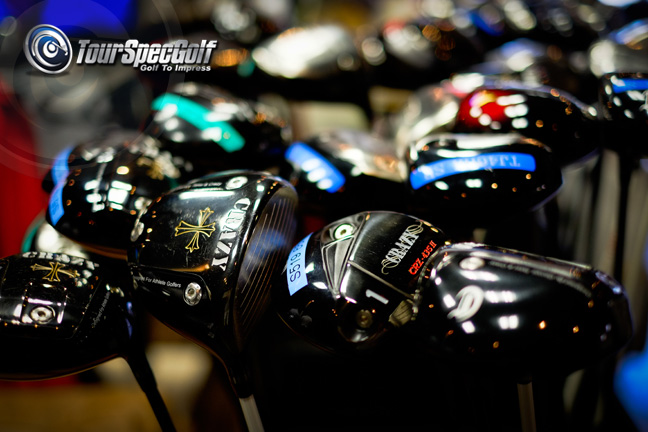 Crazy shafts as many have probably figured out are not the easiest shafts to fit and one of the reasons why is they simply have so many models. Crazy has over 150 drivers shafted up with most of their shaft models in every flex. Craig drives the ball around 245-260 yards thanks to super low back spin which gives him a strong trajectory and plenty of run.  His natural shot is a slight fade so we were looking at a shaft to promote more of a slight draw and to increase overall distance. The key to finding the right Crazy shaft isn’t just about  matching your swing speed as that is very generic, but one that produces perfect timing with a player’s swing of style. So depending on the players tempo, transition and release as well as swing path and angle of attack, the shaft that squares to the ball and helps the player hit the sweet spot most naturally is the shaft that fits. A player should not have to adjust his swing to match a shaft, the shaft should match the players swing which will in turn produce the most consistent shots, best ball speeds and most distance. For many of our players, feel is also essential and luckily, most Crazy shafts feel pretty good as you can feel the shaft load and then get that sense of acceleration at release and through impact. We decided that Craig needed more launch and a shaft that gave a great balance of control and distance. After going with many shafts, the LY-01 Nero in 6.9 Flex (Stiff/Regular) produced the most consistent drives, including the most shots on the sweet spot resulting in the best ball speeds of the day. The LY-01 was also shaping into more of a straight to draw ball for Craig (though he admittedly has been working on a draw swing). Craig already owns the entire CRZ line of drivers including the 435, 435II and the 460.  While being fit, the staff at Crazy also pulled out their latest CRZ driver the NEW CRZ-450. There was already a CRZ-450 in the past that was designed for Crazy by George Takei of George Spirits fame. The new CRZ-450 (which as you can see in the photo above of the club Craig hit – doesn’t look all that different from the original CRZ-450) which is not even out until September, provides an easier launch and more pop than the previous model.  We decided on a 10.5* which would give Craig a healthy launch and more carry to go along with his big run. 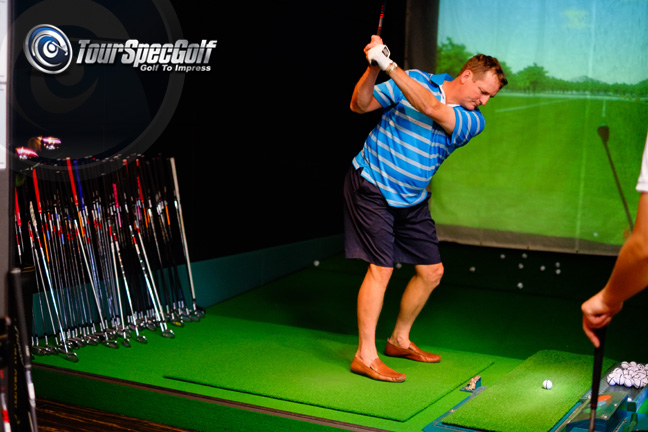 Craig also got fit for a new CRZ FW-Ti with Black FW80 6.9 Flex and a CRZ UT-Ti with Crazy Black UT Stiff. We then moved on to iron shafts. Crazy has partnered with KBS Shaft to offer essentially a Tour Issue version of all KBS shafts as part of the Crazy Sports line. Every KBS shaft is tested one by one and frequency matched in a set then certified with a Crazy Sports seal. Craig does hit his irons on the higher side so we were leaning towards the KBS C-Taper but Craig found the S flex very stout feeling. We test R+ and it was a much better fit for Craig both performance wise and feel wise as he could load the shaft and feel it more. 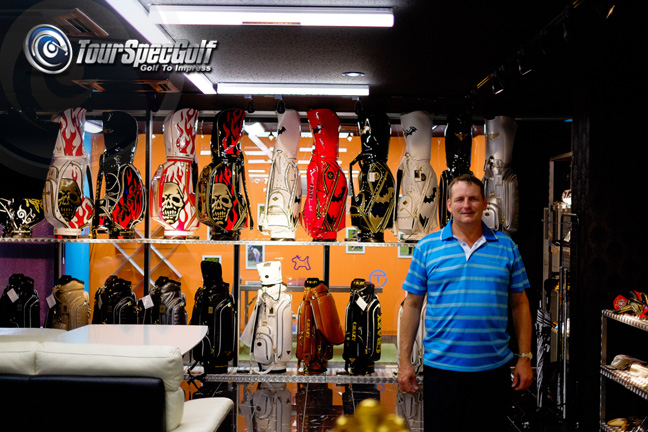 At the end of the session we also headed over the the Crazy Showroom (missed focus on the shot above!!) where Craig got Crazy’s limited edition Black Skull caddy bag as well as had the honor of being the first customer ever to buy Crazy Club holders, a tub like rack that holds about 30-40 clubs. Craig will surely make use of this to store his vast collection of clubs. It was as long afternoon and Craig hit more than 150 balls after an already busy morning at Gold’s Factory. We parted ways late afternoon as Craig prepared for a weekend of golf around Mount Fuji with Stew (supo67) and I got back home to catch up on work. On Monday morning Craig and I met again this time for an appointment at Buchi. Buchi is a brand under the Fuso Dream umbrella and is the namesake for Masatoshi Tabuchi. Tabuchi-san is one of the most famous iron and wedge grinders in Japan. Based in Himeji, before starting his own Buchi brand 2 years ago, he worked side by side with Katsuhiro Miura. Both men grinded exclusively for Japanese tour pros like Ryo Ishikawa and Tommy Nakajima. At the Fuso Dream headquarters we met with Kusaba-san, former founder of specialty brand Solid Contacts and now chief club designer for Fuso Dream. Kusaba-san would be fitting Craig for a muscle backs and other items. Fuso Dream is a wing of Fuso Electric and the golf operations actually takes place at Fuso Electric’s head office. The fitting area is in the factory where they make automated electric sliding doors, the kind you see at shopping malls and supermarkets. Fuso Dream has the financial backing of Fuso Electric which allows brands under Fuso Dream like Buchi to go all out when it comes to creating dream clubs for customers.  Craig already had his mind set on the MT201 muscle backs from Buchi so it was a matter of finding which shaft worked well with the Buchi heads and then Craig deciding on what customizations he wanted. Craig who had not used 950GH much in the past actually found it was a good match for his swing and allowed him to swing very smoothly and naturally. 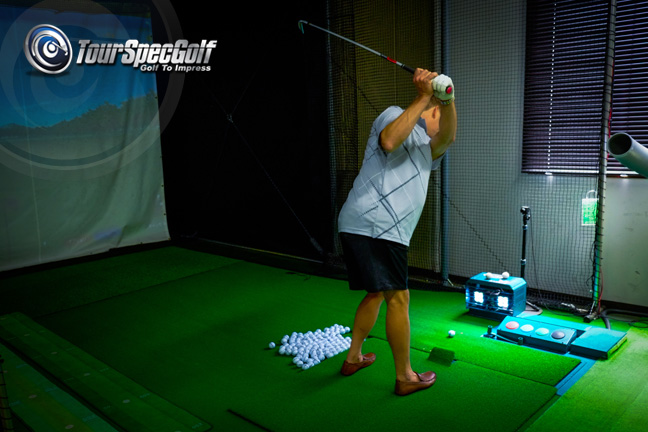 One of the reasons we also decided to go with 950GH Stiff was that we would use the shaft in all the clubs Craig got from Buchi for a consistent feel and swing. This included 2 SP-301 forged driving irons at 18.5* and 21.5* as well as an extra Sheppard Utility at 20* all with the same 950GH Stiff. We had originally thought the driving iron was only available in 21.5* and 24.5* but the 18.5* is available secretly as a custom iron for TSG customers… well I guess its not a secret anymore! Craig wasn’t thrilled by the feel off the driver and Kusaba-san explained that it was because the face is much shallower that it does not have the same springiness that a deeper faced Crazy with DAT55 feels like. This however did not mean it could not perform. Ball speeds for the Sheppard Air were right up there with the numbers at Crazy and Craig was carrying the driver 240 consistently with the STOCK shaft. I should note though that the stock shaft is no ordinary model as it is high modulus carbon made for Fuso Dream by Triphas Basileus. The stock shaft plays stiffer than most other OEM shafts and the 54R ended up fitting Craig best. Kusaba-san explained that the R is more like a stiff/regular. After the fitting, the most important part of the customization takes place. We met back up in the showroom to discuss how Craig would like his clubs grinded by Tabuchi-san. We decided on all clubs that ZERO offset is a key option Craig wanted. Typically most brands cannot produce an absolute zero offset iron especially when the mold for the original head has some offset already, however for Buchi if you request zero offset, Tabuchi-san will try his best to accommodate the request as he did with the SP-301 driving iron pictured below. We had asked that this driving iron be as close to a straight neck as possible and this is pretty good especially considering the amount of offset most driving irons usually have. Craig decided that besides zero offset, he wanted the muscle backs to be boxier and more squared off in the toe area, he also went for minimal stamping,  just Buchi and his initials on the toe in a satin finish. He also chose a set of 52 56 and 60 wedges which he asked to be made smaller and more compact with again as little offset as possible and lower bounce in the 52 and 60 (both 6* of bounce). The wedges would again be a satin finish. Buchi like Yoro craft offers a slew of finishes including raw blacks, teflon black, beads blast, satin, satin boron, black boron, mirror black, soft black, mirror chrome, copper (though copper is a bit bright). You can do any kind of stampings and even have any logo beads blasted on the back face. Overall I think Craig was very impressed with Buchi’s offerings and when his clubs are done I will be taking photos for the blog. I hope Craig had a great 2 days at Gold’s Factory, Crazy Factory and Fuso Dream/Buchi. Special thanks to Sasaya-san at Gold’s, Ueda-san at Crazy and Kusaba-san at Fuso Dream for hosting us and helping Craig with getting some dream clubs. See you in a few months Craig when you are back in Japan again!