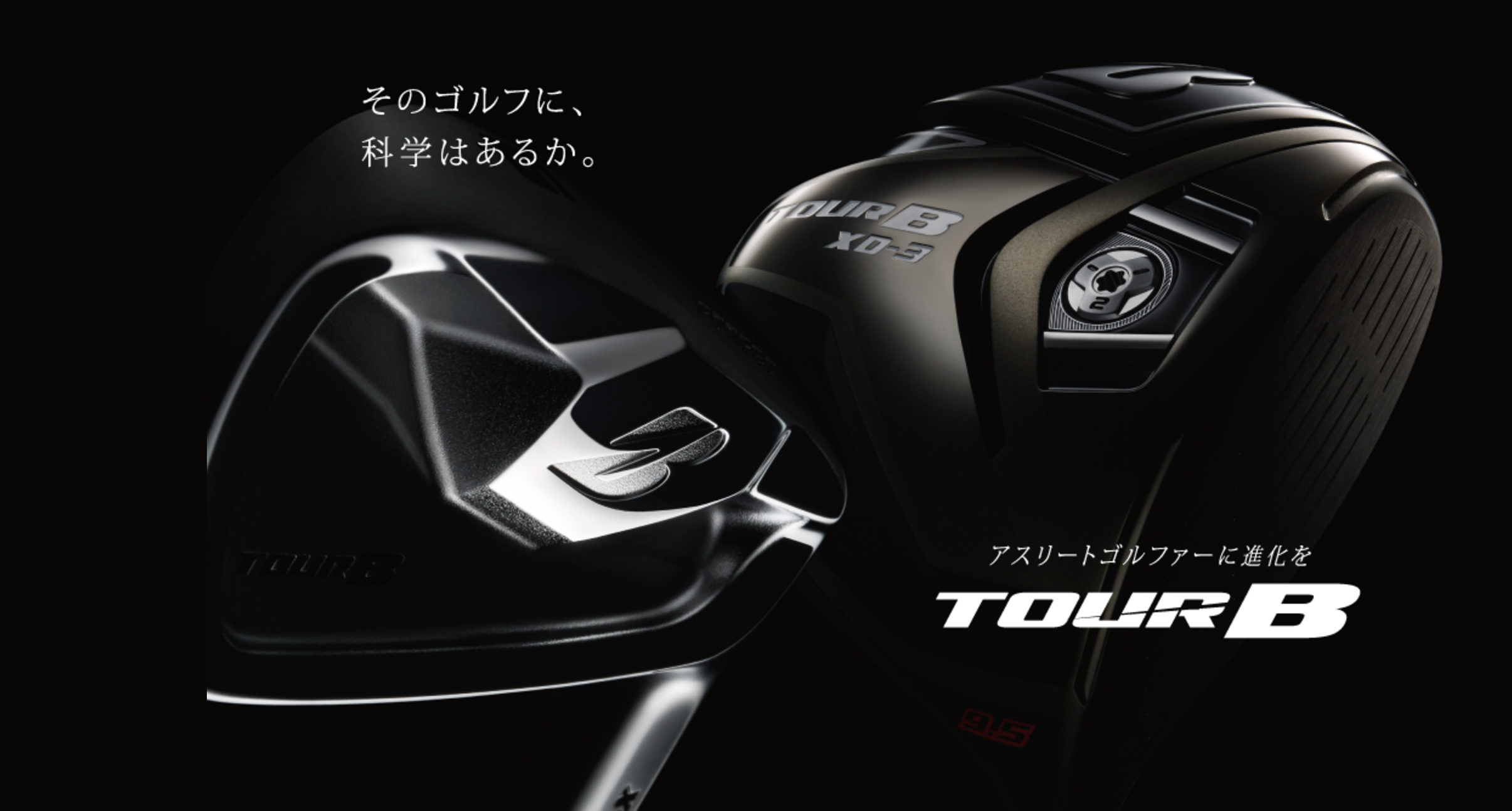 The Bridgestone Tour-B Series Golf Clubs have officially been announced.  While TSG has been posting news of this including in hand photos (here) this new pro line goes straight for the athlete low handicap player.  The first thing to notice is it reminds us a lot of TourStage and for those of you who are new to the Japanese golf scene TourStage is what Bridgestone used to be in Japan and at one time the #1 equipment company in Japan.  Overall the TourStage product was better designed with more features than the Bridgestone gear they would later rebrand to.  Not anymore as these new Tour-B’s start off exactly where TourStage left off.  Impressive to say the least.

Another thing to take note of is that there are no adjustable hosels on these clubs,  If you look on Tour most of the players opt for a non adjustable version of a club and this is the case here.  Already all the younger athlete Bridgesteone staffers have switched over to the new line of equipment and as you can see below the bags look stealth too.  I have a quick break down of all the new clubs after the jump… 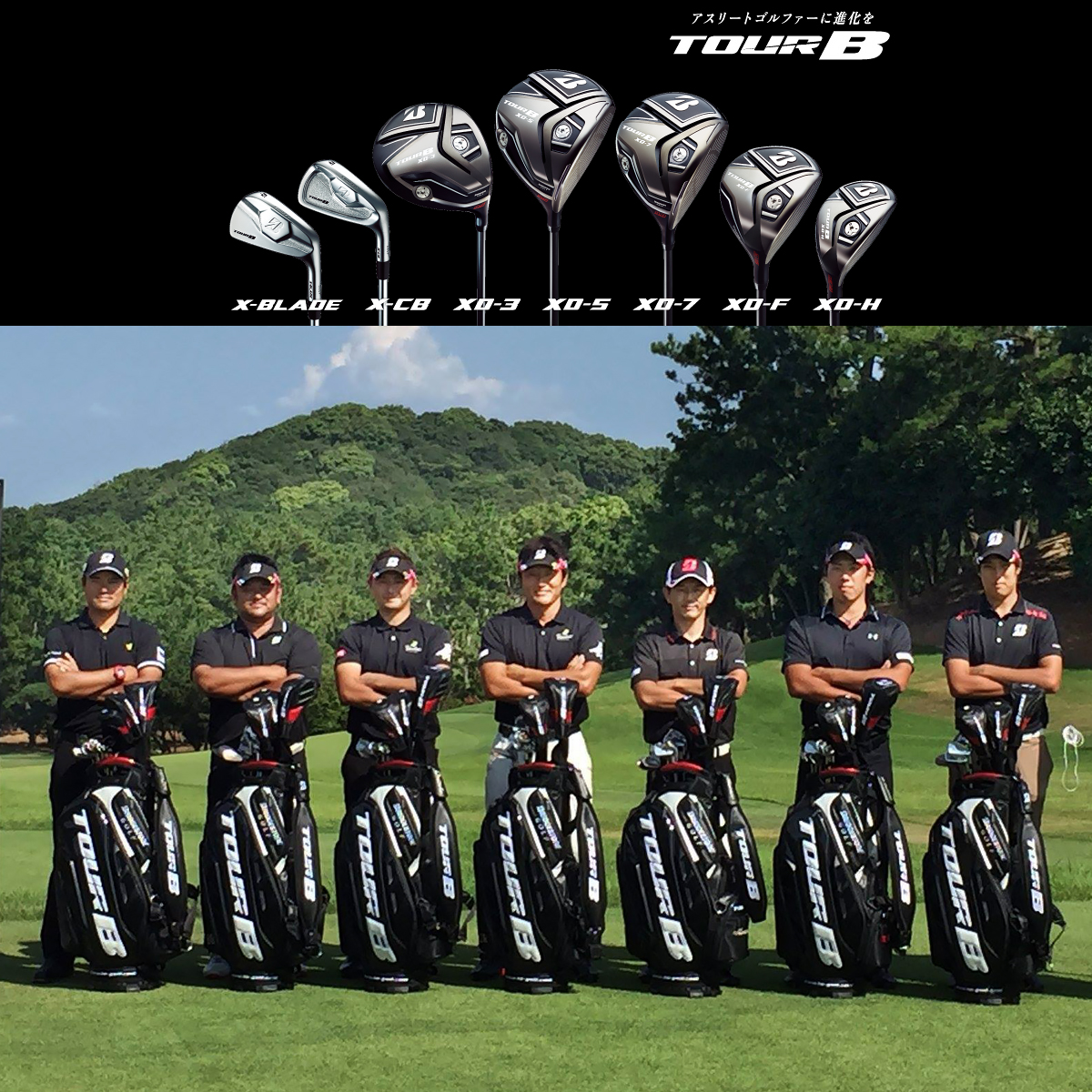 Let’s start with the drivers,  as we have been reporting there are 3 types, the XD-3/XD-5/XD-07.  This is very similar to how TourStage used to do it.  The XD-3 is basically the mid model with a balance of forgiveness, workability and plenty of loft options.  The XD-5 is the more forgiving version at a full 460cc with a slightly higher launch and higher MOI with a more rounded appearance.  Finally we have the XD-07 which back in TourStage days would be known as the “P” for pear shaped.  It’s the least forgiving of the 3,  most workable and low launching but with that classic shape you would usually associate with a blade player.

Below the differences in the shape from address.   All three are uniquely different visually,  if you can’t see that I suggest you start to think more about how your clubs look and the little differences between two clubs.  Things like how deep front to back, the area around the neck and how it tapers and the ovalness vs circular shapes of drivers.   We all have a preference when we focus in and sometimes your visual preference doesn’t match up with your performance characteristics that you require to shoot your lowest scores.  For example I would love to stare at the “P” or XD-o7 all day but I know I should be hitting the XD-05.  Hope that makes sense.

There is a lot of technology incorporated into these heads which also makes them pretty expensive compared to most drivers in the U.S.  My guess is that these are Japan Only or Bridgestone USA is headed way up market.  We are talking about $720 for the Tour AD shafted model to $870 with a few of the other shafts.   Oh yea on shafts this selection kicks ass, New Diamana BF, New Fujikura EVO III not even announced by Fuji yet and the New Tour AD TP-6 just 3 top options for you which I would be surprised if offered stateside as factory options.

Next up a quick look at the Brigestone Tour B X-0F Fairway Wood and Hybrid, at the lowest these start at $390 and with a top shaft we are at $540.  Those prices don’t look very competitive in the USA.  More like what TSG customers are used to.  Both the Fairway Wood and Hybrid are 2 part using stainless and maraging steel.  This tells me they are more workable with a lower trajectory which caters to the stronger hitter.  The deeper faces tell the same story.  So if your a mid-high capper maybe these are not the best options but if you love a pure “tink” heavier head feel and workability in a fairway club that should work both on the tee box and the short stuff it’s a worthy consideration.  Shaft options are NS950 and the Tour AD standard carbon.  The Hybrid club retails for $310 to $330.

I love these irons.  Bridgestone is continuing with the X-CB moniker and I think it’s fits as the perfect name.  X-CB and X-BLADE!  As I write this I have to keep hitting backspace because I’m typing TourStage instead of Bridgestone.  Im so happy I feel excited that TourStage is back even if its under a new name.  It’s got a wider sole that sits narrow due to a trailing edge grind.  They are Forged of course but we don’t know of what material exactly and it’s hard to tell where these are made.  One thing to notice is all these new clubs say Made in Japan.  I’m almost certain that means “assembled in Japan”.  But again we can’t tell right now until we have them in hand.

So today TSG is opening it’s pre-orders of the new Tour-B series.  Again they start shipping in October and first batch usually goes really fast.  (Click Here) to get yours!